In the course of this crisis, a new political party – the British Freedom Party – has distributed material in Belfast communities masquerading as a “Christian fellowship” and purporting to offer assistance to the vulnerable. In reality, this is a split from the far-right Britain First group and the new brand of their former leader, Jayda Fransen, and ex-councillor Jolene Bunting.

In the course of this crisis, a new political party – the British Freedom Party – has distributed material in Belfast communities masquerading as a “Christian fellowship” and purporting to offer assistance to the vulnerable. In reality, this is a split from the far-right Britain First group and the new brand of their former leader, Jayda Fransen, and ex-councillor Jolene Bunting.

Another figure giving it financial backing is Jim Dowson, who previously bankrolled Britain First and the BNP. He has another new organisation – the Knights Templar International (KTI). On the face of it, this group may seem like a laughable bunch of fantasists, styling themselves after the Medieval Catholic military order of the same name, which took part in the Crusades. They have daily sermons online which, alongside readings from scripture, involve rants from Dowson, where he praises the likes of brutal dictator Francisco Franco and interviews contemporary fascist figures. Dowson sees himself as a sponsor of the far right internationally, most recently attempting to supply hardline Serbian groups in Kosovo.

The British Freedom Party and particularly its new paper have also been endorsed by Nick Griffin, former leader of the BNP and previously an organiser with the openly neo-Nazi National Front. While they like to present themselves as spreading the Christian message and “defending culture”, it doesn’t take long browsing through their website to see their real agenda. They see themselves as soldiers in an ongoing war against multiculturalism and talk about a race war. The group also majors on transphobia and homophobia. Like the far-right in the US, they have engaged in ‘doxxing’, publicly naming individuals to be harassed online.

Far right groups are not confined to one side of the sectarian divide. While the British Freedom Party will naturally focus on trying to gain support in Protestant working-class areas, equally abhorrent and dangerous far-right Irish nationalist groups are attempting to do the same in Catholic working-class areas. Recently, Síol na hÉireann used similar tactics to Fransen and Co, dropping leaflets in Derry which supposedly offered assistance during lockdown. The National Party – headed by Justin Barrett, who has long-standing connections with fascist groups across Europe – is also attempting to organise in Derry and across the North. Both groups are vehemently racist, supporting the expulsion of non-white and non-Christian immigrants, as well as rabidly homophobic and anti-choice.

The massive and cross-community support for Black Lives Matter protests here, despite repression from the police at the behest of the Stormont politicians, shows that we are in a strong position to build an anti-racist movement at the moment – one that can unite people from all backgrounds to take on the far right and challenge racism in all its forms. Linked with mass mobilisation against the far right, we need to campaign against the social conditions which allow these groups to grow – poverty, unemployment, housing stress, crumbling public services, division. The trade union movement has a crucial role to play on both these fronts. 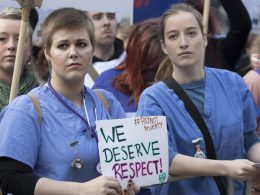 Anti-racism campaigner calls for community to stand together against racism

The appearance of racist graffiti on homes of migrant workers in the Holylands area of South Belfast has been condemned by an anti-racism campaigner.

Paddy Meehan, who organised a community solidarity protest against attacks on Romanian families in South Belfast in 2009, claimed
“Several homes have been targeted with racist graffiti in the Holylands area. Swastikas and slogans such as ‘Pakis Out’ are aimed at intimidating migrant workers and ethnic minorities in the area. If these racists are allowed to continue this unacceptable behaviour people will begin to fear for their safety.

In 1939, Billie Holiday sang of blacks hanging from trees in the protest classic “Strange Fruit.” Since then,…
byArchive