A spectre is haunting the world, the spectre of irreversible climate change. But at the same time the world is in the grip of a desperate hunger for energy.

Every year we generate and use more and more, producing new products while people in rich countries are cajoled to throw away old ones.

In Britain, energy consumption has stayed fairly constant over the past 30 years, because nearly all consumer goods are imported.

The energy used to make these goods is, for example, produced in China, one of the reasons why their demand for energy has skyrocketed. But the need for more energy is not just a demand of the ‘greedy West’.

As workers in the developing world organise and find a voice, they demand the goods that we take for granted – refrigerators to preserve food, electric light and heaters.

Roads, railways, decent housing, all need more energy, even though new technologies can do something to slow the growth in demand – mobile phones can replace expensive landline systems; LED lights use a tiny fraction of the power needed by incandescent bulbs.

The table shows the worldwide growth in energy supply. But that increase comes at a huge potential cost.

The concentration of carbon dioxide and other ‘greenhouse’ gases in the earth’s atmosphere is increasing.

That increase will lead to a global temperature rise with results that could be catastrophic for humanity.

Worldwide, 87% of our energy is produced by burning non-renewable fossil fuels – primarily oil, gas and coal – which all generate carbon dioxide.

In Britain the proportion is almost the same, while the Con-Dem government is committed to sourcing a mere 15% of energy from renewables by 2020. In energy production, just reckoning on more of the same will lead to catastrophe.

Today, most of our energy is produced by big companies with only one goal – short term supply and higher profits.

For oil, suck up to Middle Eastern sheikhs, or turn agricultural land into polluted wasteland.

Only when pollution came nearer to home, in the Gulf of Mexico, did the US dominated oil industry have second thoughts – for a moment.

For a generation, world oil supplies have been dominated by the dictatorships of the Persian Gulf, with Saudi Arabia producing nearly a tenth of the world’s oil exports.

In a desperate search for other sources, oil companies drill offshore, moving into deeper and more dangerous waters.

A supreme irony is that global warming itself is melting the polar icecap, opening up the Arctic’s huge oil and gas fields for exploitation which will mean further catastrophic increases in global temperatures.

Strip mining of tar sands in northern Canada, a filthy and energy wasteful process, provides 20% of US oil imports.

Now there is a proposal to produce a toxic wilderness the size of Saudi Arabia in the Canadian North, carrying oil in pipelines west to the Pacific coast and thence to China (a proposal which is generating massive protests).

Some see ‘biofuels’ as an alternative source, but this involves destroying huge areas of rain forest in Latin America and turning over land in the USA and elsewhere to maize production for fuel. This land could be used to provide food.

After oil, natural gas is the second biggest source of energy in the UK, third after coal and oil in the world as a whole.

In the 1980s and 1990s the Tories used North Sea gas fields to shore up their failing capitalist economy.

Now those supplies are running out – in 2011 gas imports exceeded home production for the first time.

Worldwide, production is still increasing but reserves are obviously finite. What is more, there is nothing to stop exporters arbitrarily increasing prices (as Opec did, hiking oil prices by 70%, in 1973), or cutting off supply completely as Russia did with gas for Ukraine in 2009.

The new panacea is ‘fracking’ – fracturing deep layers of shale to release gas. In Britain, Con-Dem ministers have jumped to allow private firms to dash ahead, even after an early experiment triggered minor earthquakes and a real risk of ground water pollution.

Tories talk about ‘cheap’ gas, but the gas produced will be traded on the world market and will increase in price with international trends.

In any case, a recent report suggests that the cost of extraction will be higher than present world gas prices.

Since the Tories all but destroyed the British coal industry in the 1980s, Britain has imported twice as much coal as is mined here.

Worldwide, the International Energy Agency predicts that, on present trends, coal will be the biggest source of world energy by 2020 and that if this trend continues, the world’s climate could rise by a catastrophic six degrees by 2100.

In Sellafield the store of highly poisonous waste is equal in volume to 27 Olympic swimming pools, and the authorities have no idea what to do with it (or even where some of it is!).

Systems using less dangerous materials could be built but, once again, governments and private companies are not willing to make the long-term investment required.

Meanwhile the possibility of efficient pollution-free systems using nuclear fusion (rather than fission) has proved a mirage, retreating as technology appears to get closer.

Carbon capture?
Coal, oil and gas all need more and more expensive, dangerous and polluting processes to extract them, while all producing ever more greenhouse gases.

Climate change cannot now be stopped, but it could be slowed by capturing emitted carbon dioxide and storing it.

But this would require research and development of feasible systems which would cost money and cut the profits of energy companies.

Governments have talked about the need for carbon capture and storage (CCS) but more research is needed into practical systems and the number of CCS plants already in operation is tiny in comparison to the problem.

Worldwide in 2011 there were 16 large scale integrated CCS plants capturing in total less than a thousandth of the amount generated.

More are in the planning stage (particularly in China) but in many cases government investment is not forthcoming.

In Britain, for example, the Longannet CCS plant which would have captured around 1.5 Megatons a year was scrapped in 2011 because the Spanish owners of Scottish Power and the Con-Dem government could not agree on support for the project.

Although Ed Davey, the Con-Dem energy secretary talks grandly of ‘great opportunities’ in CCS for industry, there is currently little research and no operational large-scale CCS system in Britain.

There is an alternative
There is an alternative to indefinite increase in use of fossil fuel. In fact, back in November 2009 an article in the well-known US journal Scientific American showed how using today’s technology alone, it would be possible to meet all the world’s energy needs using renewable and non-carbon dioxide producing energy sources. What are these sources? Primarily solar power, wind power and water power.

In California, for example, nearly two Gigawatts (GW) of solar power has been installed. This is partly in large scale ‘solar farms’ but also on the roofs of homes and businesses feeding their own needs.

This ‘distributed power generation’ has the great advantage of cutting down on transmission costs.

It has been adopted in Germany and was one of the aims of the last UK government, providing a ‘feed in tariff’ to give a boost to British solar PV firms (now cut by the Con-Dems).

Of course California is a special case, with an ideal climate and acres of desert for solar farms, but the idea is being taken up in other continents.

In Ghana, for example, a single solar project will provide 155 Megawatts (MW) of power – 6% of Ghana’s total needs.

A huge project, the Desertec initiative, aims to provide 15% of Europe’s power needs from solar farms in North Africa via cables under the Mediterranean.

This has run into major problems, not least because Africans have questioned why, when they are desperate for power, should they be shipping it to Europe, but the project shows that this scale of energy generation is practical.

Wind power has become the most demonised source of renewable energy. Leaving aside myths about offshore wind farms terrorising dolphins and killing migrating birds, wind energy is usually pictured as unreliable and expensive. In fact, neither is the case.

A recent study (by respected research group Cambridge Econometrics) has shown that offshore wind turbines sufficient for a quarter of British energy needs would cost very little more overall than the equivalent using gas, while in addition producing tens of thousands of jobs in the construction industries.

Systems are needed to store energy to be used when there is no sunshine or wind, but it can be done. To the charge that winds are not reliable, we should answer that in the long run the wind is far more reliable than Russian oligarchs, or Arab sheikhs.

In 1930s USA, the Tennessee Valley Authority was set up as a Federal hydropower agency against bitter opposition from power companies, to provide work and cheaper electricity from a network of huge dams.

In China, the Three Gorges Dam across the Yangtze River provides 22.5 GW of power. But that dam displaced some 1.3 million people and caused significant ecological damage.

On the other hand, ocean, wave and tidal power are huge and completely under-used sources of power, especially for an island nation like Britain.

In Europe there is one large-scale system, the tidal barrage on the French Rance Estuary which has been working since 1966 producing 240 MW. of power.

But grandiose projects like the Severn Estuary tidal barrage, which it is said could produce 5% of Britain’s needs, are almost certainly not the best option.

A majority of the construction industry could be tied up in it for years and it would have unforeseen environmental consequences.

On the other hand, a network of tidal generators as proposed by Friends of the Earth, would produce as much power but with far less environmental damage.

Finally, the development of generators using wave power has been all but ignored by both government and energy companies.

All in all, there has been minimal interest by governments or big energy companies across the world in developing systems which would be non-polluting and would not produce greenhouse gas.

Although research into even newer technologies may offer still more effective solutions in the future, and should be fully resourced, the problem must be dealt with urgently.

In Britain, New Labour and Tories’ obsessive reliance on private industry will mean the worst of both worlds.

On the one hand, carbon dioxide belching coal-fired power stations must be closed and multinational firms have refused to invest in new nuclear or conventional generators.

On the other, governments have failed to make a real commitment to non-polluting energy sources or serious energy saving.

They hope to rely on gas-fired power stations, either importing gas or using polluting and possibly dangerous ‘fracking’.

And the head of the industry regulator Ofgen predicts that in a few years we face power blackouts, not seen since the 1974 miners’ strikes.
What should socialists do?

First, we can place no faith whatsoever in the capitalist system to avert the threatening catastrophe.

In Britain we must demand: 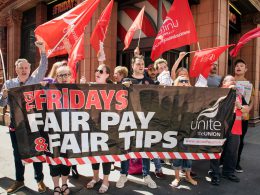