Protesters from a Unite-backed campaign group Youth Fight for Jobs & Education disrupted proceedings in the Assembly chamber this morning in protest at planned cuts to EMA. As Minister for Employment & Leaning Stephen Farry rose to speak, six young protesters stood up, unfurled posters and began to chant.
They chanted “Stephen Farry, hear us say – don’t you cut our EMA!” and “Hey, Stormont, hear us say – don’t you cut our EMA!”. Their posters read “Stormont: Hands off our EMA! Make the bankers & super-rich pay, NOT young people!” Minister Farry was forced to stop speaking. The protesters were escorted from the chamber, continuing to chant.
Neil Moore – spokesman for Youth Fight for Jobs & Education said: “The Assembly Executive has no mandate for the EMA cuts they are implementing. It did not feature in their election campaigns and the so-called consultation which took place was a sham. Ordinary people weren’t given a real chance to voice their opinions. The politicians are refusing to listen to reason – that’s why we held our protest in the chamber today.
“This cut will see 4,500 young people lose the payment and will lead to more people being forced out of education when youth unemployment is already at 25%. While the politicians happily implement austerity which hits students and working-class people, the Assembly Executive continues to lobby for even more handouts to big business through a cut to corporation tax.
“It’s disgraceful that the current leadership of NUS-USI has signed up to these cuts. We demand that Minister Farry engages in a public debate with us about the impact this cut to EMA will have. If he continues to refuse, we will continue our campaign of protest.”
Youth Fight for Jobs & Education has organised a campaign of protests against the proposed cuts to EMA, including a recent occupation of the Department of Employment & Learning on Adelaide Street
– The group is backed by seven national trade unions, including Unite, PCS, CWU, and UCU, and the INTO and Fire Brigades Union in Northern Ireland.

The recent announcement that the Lough Erne Luxury Hotel and Golf-course was being put into administration represents the latest blow to the Fermanagh economy. It follows a similar move at the Quinn Group that is likely to herald large-scale redundancies as new owners seek to “restructure” their holdings to maximise profits.﻿

March for a Future! 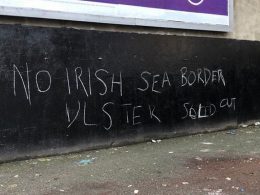