There have been a number of deaths in Northern Ireland recently being linked directly to the use of Ecstasy, an illegal class-A stimulant. Recently fake or poorly made pills known as ‘Speckled Rolexes’ have left a series of people dead or seriously ill in hospital.

This example as well as many others demonstrates very clearly some of the issues surrounding illicit drugs. If someone buys a gram of speed they don’t know what it has been cut with. Because it’s produced in an illegal market, it is known to contain anything from meth to cocaine to piperazine (an animal de-wormer). By pushing drugs into the black market we have seen a huge risk develop to users. Unregulated and sold solely for profit, everything possible is done to reduce production costs and increase profit leaving users in a very dangerous and often unpredictable situation.

A lot of these drugs are taken as a means of escapism. We live under a capitalist system where even when it’s not in a crisis a lot of us still have to live day to day and experience all sorts of degrading practices from poverty, racism, sexism, homophobia to grinding and alienating work. Many feel they have a 48 hour weekend to escape from reality. Many people get blocked on alcohol, pop a pill or smoke a joint.

Prohibition allows criminals lace drugs with anything they want to maximise profits. Screening of drugs should be provided for users to minimise the risks of deaths. Drug abuse wrecks working class communities and destroys people’s lives. Opening up a new market for large multi-nationals to exploit people’s addiction for profits will not solve the problem and neither will capitalism. It is the system that creates most of the reasons as to why people abuse drugs. 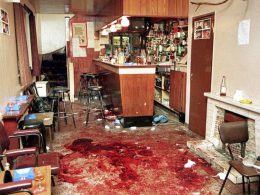 On the night of 18th June 1994, the Heights Bar in Loughinisland was packed with fans watching the Ireland versus Italy game in the World Cup. Members of the UVF burst in and opened fire, killing six innocent men and wounding five others. No Stone Unturned tells the story of their families' fight for justice. This massacre was the UVF’s answer to the killing of three of its members in Belfast by the INLA and part of the long cycle of ‘tit for tat’ killings.
bySocialist Party
1 share
1
0
0