Fresh health cuts totalling £70 million across Northern Ireland have been announced. This is the result of years when the Executive failed to ensure healthcare funding met increased demand, an estimated six percent annual reduction in budgets. 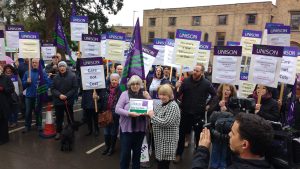 Fresh health cuts totalling £70 million across Northern Ireland have been announced. This is the result of years when the Executive failed to ensure healthcare funding met increased demand, an estimated six percent annual reduction in budgets.

The five Health Trusts have put their cuts proposals out for ‘consultation’, a sham process in which ordinary people and health workers will have no real say. The cuts will see wards closed, waiting lists for non-emergency surgery grow even further and staffing levels drop. It will exacerbate the already existing crisis in GP services in rural areas. The neo-natal unit at the South-West Acute Hospital is under threat, as are public residential care homes in Derry.

Typically, the response of the DUP and Sinn Féin has been to blame each other. In reality, both are to blame. All the main parties support the project of slashing health under the guise of centralisation while privatising more and more NHS services.

The cuts were met with trade union protests. This is to be welcomed but much more will be required. If this round of cuts is not resisted, more will follow. It’s time for the trade union movement to launch a determined campaign of industrial action, combined with mass protests, in order to demand investment to meet need and kick the profiteers out of our health service. 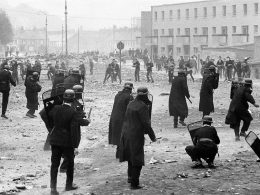