The Social Development Committee at Stormont is currently holding an inquiry into allegations of wrongful political interference in the Housing Executive. The allegations arose from a BBC NI Spotlight programme on 3 July 2013.

At a meeting on 14 November, a senior civil servant admitted that he had been told to mislead the Assembly Committee about a meeting Minister McCausland had about a contract for double glazing.

Mr McCausland and other officials had the meeting with Turkington Holdings in April 2012. When the senior civil servant had to write to the Social Development Committee about that meeting, he was then told by the Minister’s private office to change the reference to Turkington Holdings to the Glass and Glazing Federation (GGF), as well as Fusion 21 – a procurement body that was not present.

At the same meeting, Jim Allister reported that when he ran for election to the EU Parliament in 2004, Turkingtons provided vans to the DUP for use in the campaign.

Once again this shows the cozy relationship between the political establishment and business. This is only the start of the inquiry and it will be interesting to see what other dead bodies are going to fall out the closet.

It is not the first time either that issues have come to light about how Ministers award contracts to businesses, without following the official tender process procedures. Earlier this week, criticisms were raised about the tender process for the Lyric Theatre. The Public Accounts Committee report found that the process was significantly flawed and failed to adhere to principles of good practice, leaving a strong impression that the outcome had been rigged and manipulated. The Assembly Executive’s policy of outsourcing and privatisation of public services is designed to put profits first, at the expense of working class people. The political parties in Stormont should be made disclose where they get their funding from so that ordinary people can see what business interests are at play. 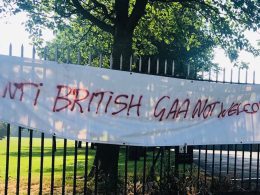 These are public spaces and people have the right to engage in cultural and sporting activities free from intimidation. This incident is one reflection of a process people across the North, particularly from working-class communities, will know all too well - the attempt to mark and claim territory. As is common, these actions can lead to tit-for-tat retaliation, with reports of young people attacking the small Protestant estate of Westland Drive. The marking of territory can lead to attacks to intimidate people out of areas, as one ‘mixed’ couple discovered recently in Coleraine.