In an unprecedented move, 98% of members at a consultative meeting of Community Pharmacy Northern Ireland (CPNI) – representing pharmacy contractors – voted to take industrial action over a funding crisis which they described as leaving “crucial frontline services” at “breaking point”.

In an unprecedented move, 98% of members at a consultative meeting of Community Pharmacy Northern Ireland (CPNI) – representing pharmacy contractors – voted to take industrial action over a funding crisis which they described as leaving “crucial frontline services” at “breaking point”. At a time when an emphasis is being placed on primary care, to prevent people ending up in hospital, CPNI reports that staff are working excessive hours under huge pressure to meet the needs of their 123,000 daily users, while pharmacies are struggling to pay bills from wholesalers.

While this crisis has been developing for years, members of CPNI were undoubtedly influenced in their decision by the success of recent strikes by staff in health and social care in securing concessions from the newly re-established Stormont Executive. It is, as yet, unclear what form this industrial action will take. Despite a report finding that pharmacies here are underfunded to the tune of £20 million per year, Health Minister Robin Swann described CPNI’s decision as “regrettable and surprising”.

Already, there have been muted suggestions that the Executive may seek to reintroduce prescription charges. This would place further burden on the shoulders of working and middle-class people who are already struggling to make ends meet, and would penalise people for getting sick. We need to fight to defend and extend the right to universal healthcare, free at the point of use.

Instead, the profits of pharmaceutical giants which make a killing off our NHS should be targeted. They should be brought into public ownership and run democratically to meet need, not to make billions for shareholders. Community pharmacies should also be fully integrated into a democratised and comprehensive NHS. In the face of threats from both Stormont and Westminster to further cut and sell-off our health services, the trade union movement must lead the battle to demand that accessible healthcare for all is prioritised over the interests of the billionaires. 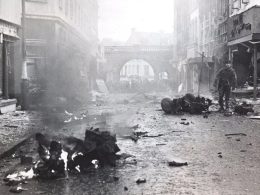