In a show of cross-community, working-class unity, leisure centre workers from the Shankill Road and Falls Road, trade unionists and people from across Belfast came together to protest the declining working conditions and plans which threaten forty-nine jobs that have arisen since the takeover of Belfast’s leisure centres by Greenwich Leisure Limited. 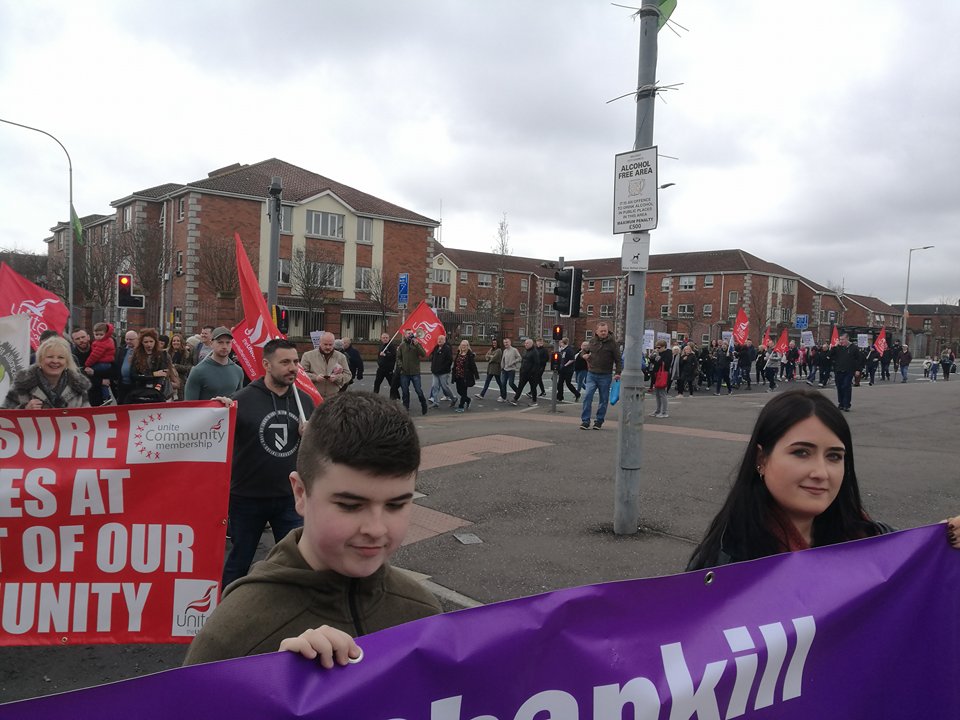 In a show of cross-community, working-class unity, leisure centre workers from the Shankill Road and Falls Road, trade unionists and people from across Belfast came together to protest the declining working conditions and plans which threaten forty-nine jobs that have arisen since the takeover of Belfast’s leisure centres by Greenwich Leisure Limited

The protest on Saturday 7th April consisted of workers and concerned locals meeting outside Falls leisure centre and Shankill leisure centre, with a total of over two-hundred people meeting across the two. The gatherings then marched to the Northumberland Street peace line to show the true cross-community solidarity for the workers. Once the two marches gathered, trade union officials and local political activists spoke to the crowds. While there is still a feeling of uncertainty for what will happen to those threatened by the potential jobs losses, there is also a sense of unity and hopefulness for what the near future has to offer in the struggle to bring our leisure centres back into public hands.

This sense of need for continued action was again shown at the march on City Hall on 1st May, International Workers’ Day. The march, which began at the Unite trade union offices, again showed the outright anger from those affected by the privatisation of leisure centres and demonstrated how the working class was able to, once again, put aside their differences to show that they will not stand for austerity and privatisation.

With parties on the Belfast City Council such as Sinn Féin and the DUP going along with the privatisation of centres and taking no action on the poor working conditions or the potential job losses, it is evident that there is a need for a truly cross-community, socialist party to act around these issues affecting the working class. The momentum built from these demonstrations against the privatisation of public services must be carried forward until the privatisation of our leisure services is reversed and all jobs guaranteed.

By Jim Rutherdale, A single person has to earn at least £16,850 a year to achieve a ‘minimum’…
byArchive