Jeremy Corbyn has won his second election to the Labour Party leadership within a year, following an attempted coup by 172 right-wing MPs. He increased his support from 59% to 62% despite the largescale purges of pro-Corbyn members by the right wing bureaucracy. Hundreds of thousands were excluded from voting or even expelled in an attempt to shrink Corbyn’s mandate. Despite their machinations, the Blairites were unable to stem the tide of mass support for anti-austerity, anti-war and pro-worker policies which has seen Labour membership mushroom under Corbyn, becoming the largest party in Europe.

Unfortunately, Corbyn and those close to him are talking about “unity” and offering an “olive branch” to the Blairites. These Red Tories are ideologically opposed to socialist policies that can deliver for working class people and challenge the rule of the 1%, who they represent. They will continue to sabotage Corbyn’s leadership from within. The last year has demonstrated that unity can only be achieved on their terms – by abandoning the very policies which have created the wave of enthusiasm which swept Corbyn into the leadership.

Instead, Corbyn should use his increased mandate to democratise the party from top to bottom. To shake the Blairites in their ivory tower, local Labour members must be given the automatic right to choose who represents them future elections. Right-wing MPs’ sense of entitlement to a seat for life must be broken. But that is not enough. MPs who continue to attack Corbyn’s leadership and refuse to support the policies which have been overwhelmingly endorsed by the membership should have the Labour whip withdrawn. The trade unions’ central role in the party must be re-instated and socialist and campaign groups allowed to affiliate.

As well as taking on the Blairites and challenging the Tories inside Parliament, Corbyn and his supporters should focus on rebuilding a mass anti-austerity movement on the streets and in the communities. Pressure should be exerted on the trade union leaderships to develop a serious plan of action for co-ordinated industrial action to resist cuts and advance the interests of working people. This would further undermine the weak Tory government, elected with only 24% support, forced into endless U-turns and wounded by the Brexit vote. (For more detailed analysis, see the centre pages)

There is growing support for left-wing, anti-austerity policies in Northern Ireland. This has been partly reflected in the growth locally of the Labour Party, which – despite not contesting elections here – now claims over 3,000 members, making it one of the largest parties here. Local members nominated Corbyn for the leadership by a large majority. We need to harness this enthusiasm by building a political voice which is 100% anti-austerity and resists sectarianism in all its forms, advocating compromise, mutual respect and solidarity between working class communities.

Labour Alternative was initiated by the Socialist Party to begin to fill this vacuum. It involves Labour Party members, trade unionists, community activists and campaigners for LGBT and women’s rights. At the recent Assembly elections, the three young candidates won the highest left-wing, labour movement votes in their constituencies in decades. This is an important start which can be built on in the coming years, as opposition to sectarian division, inequality and the austerity implemented by the DUP and Sinn Féin mushrooms. 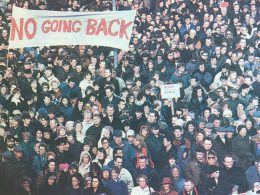 Workers face many problems in 2019 – from the ongoing effects of the cuts, years of below-inflation pay rises, and the ever present threat of sectarianism. In 1919, 1944 and 1969 the working class were given a powerful lead by militant workplace activists. In each period they also had trade union-linked political representation. We need to learn from these struggles, rebuild fighting trade unions, and recreate a socialist political alternative. We need to reclaim our past. 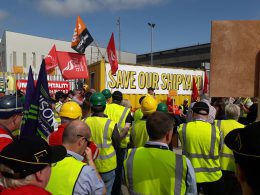