1 week ago
Stormont’s education fiasco
1 week ago
Chaos in the Capitol: Build a Movement to Defeat the Far Right
1 week ago
Brexit: A deal without winners
2 weeks ago
Kingsmill Massacre – Forty Five Years On
2 weeks ago
The fatal shooting of George Nkencho & its aftermath

During the campaign, workers were attacked by Openreach senior manager Olly Kunc, who told CWU members that, if they didn’t like it, they could leave. Management have acted in bad faith previously by withdrawing at the last minute from targeted negotiations to redeploy workers facing immediate redundancy. To add insult to injury, on the eve of the ballot result, a further 28 workers were informed by BT Technology that they were at risk of compulsory redundancy. These are all essential workers who, during the lockdowns, were key to keeping society connected and communicating.

There is now a strong basis to force senior management to back down. Dave Ward and Andy Kerr (General and Assistant Secretaries of the CWU) announced the result on 10th December with the commitment they would take the consultative ballot result back to BT management, demanding a complete change and a new ‘job security policy’ with the company.

Set the date for the industrial ballot

It’s clear that hundreds of jobs are at risk now and thousands in the future. Senior management have given no indication that they will back down. The CWU must utilise the momentum of the consultative ballot result and set the date now for a full ballot for industrial action in the new year, ahead of any negotiations.

– a commitment to zero redundancies;

– a return to redeployment, with pay and pension protection;

– enhanced voluntary leaver schemes for those seeking early retirement;
– a commitment that all positions left vacant will be properly staffed;

– bringing all subcontractors in-house on equal terms and conditions;

– a joint campaign involving the professional and managers’ union Prospect, to make this a company-wide policy.

The union’s campaign for job security can be a launching point for a struggle to bring communications back into public ownership. The pandemic, alongside the rapid pace of technological change, demonstrates that access to decent broadband is now an essential service that must be universal and free. Through nationalising the telecoms network under workers’ and consumer control, a real super-fast broadband service free for every household in Britain and Northern Ireland could be rolled out. 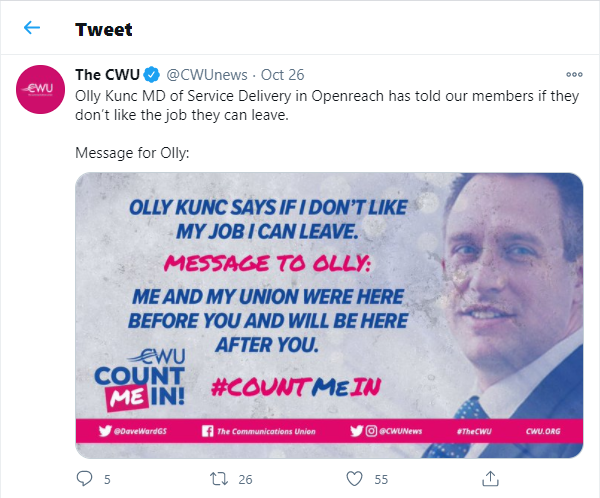