In the past year, the top 1,000 richest people in the UK have seen their wealth grow by 5%. Added together, their combined wealth comes to an obscene £414.26 billion! The revelation that the super-rich are seeing their wealth grow at a time when the vast majority of people are seeing job losses, wage freezes, pensions under attack and much needed public service getting cut to the bone have exposed the lie that “we’re all in this together”!

Millions of workers are seeing their pensions being cut and made work longer for less as part of the Tory/Lib-Dem government’s overall attacks on working class people. This cabinet of millionaires has consistently used every opportunity to attack ordinary peoples’ living standards but continues to cut taxes for big business and the rich.

Those at the top continue to live in incredible luxury. Last year the appropriately named chief executive of Barclays bank, Bob Diamond, was paid £6.3million in salary and bonuses. Unbelievably, he was not the highest earner at Barclays last year! What a perverse irony it is that those who caused the economic crisis are being awarded with such huge payments, at our expense. It was our money which was used to bail-out the banks – billions of pounds which should have been invested to create jobs.

In the last Budget, those in receipt of benefits and pensioners saw their income cut yet individuals on more than £500,000 a year saw their annual income increase by at least £17,000 as a result in tax cuts. Cuts to tax on profits (corporation tax) are literally resulting in millions in revenue which could be used to fund essential services instead go to the bank accounts of big business. According to Cameron, Clegg and Osbourne cutting tax for big business leads to investment and job growth – but the opposite is happening. As the rich have seen tax cut after tax cut, investment is drying up. Big business is sitting on huge reserves of capital but will not invest as they don’t see any profit to be made. As a result, unemployment continues to rise – leading to a generation of young people worse off than their parents were at their age. The unemployment figures don’t tell the full story though. Young people – seeing no future or prospects here – are emigrating in their droves in search of work.

It is clear that the policies of austerity – of savaging living standards for the majority of people – are making the crisis worse. In particular, areas more dependent on the public sector such as Northern Ireland are disproportionately affected by the cuts. Across the North unemployment is on the rise. City and town centres are on their knees as more and more people are forced to cut back on spending. All the political parties in the Assembly Executive are united in implementing austerity. A colossal £4billion is set to be cut by the Assembly Executive in the next few years – it is economic suicide! Rather than refusing to implement such drastic cuts which are destroying the economy, they want to see more cuts so they can cut corporation tax on big business!

The insistence of all the parties in the Assembly in trying to prop up a failed capitalist system is causing enormous hardship for ordinary people – we need to build a fighting alternative to organise people to fight the Assembly’s austerity and put forward socialist policies to get people back into work and put the interests of ordinary people before those of the rich and powerful. 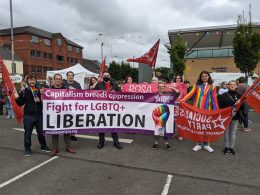 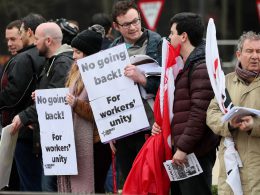