Organisers of protests against the G8 visit to Fermanagh in June have criticised recent PSNI statements as being ‘irresponsible, provocative and groundless’ including the baseless allegation that protesters were preparing ‘violent attacks including acid bombs’.

Donal O’Cofaigh of G8 Not Welcome, a broad protest group based in Fermanagh, stated,

“The statements coming from senior PSNI representatives to the media are outlandish and are clearly an attempt to smear and denigrate the thousands of people who will protest against the G8. This sort of propaganda is designed to distract from the actual reasons why people wish to protest and an attempt to intimidate people from taking up their legitimate right to protest peacefully.

“The G8 governments represent the 1%, not the 99%. They are responsible for orchestrating the global austerity measures which are causing untold misery for ordinary people and mass unemployment in country after country. They seek to safeguard an economic system which results only in global poverty, permanent wars of plunder and widespread environmental destruction.

“In their 2012 Communiqué, the G8 endorsed the environmentally and economically destructive gas extraction process, Hydraulic Fracturing (Fracking), and many question why David Cameron has chosen Fermanagh to host this summit at a time when there is growing grassroots and global opposition to this invasive and highly polluting practice being enforced here.

“There are a host of legitimate reasons why local people and a variety of protest groups should oppose the G8 leaders being given a five-star welcome (at taxpayer expense). People have the right to peaceful protest without being demonised by the PSNI or elements in the media.

“The coming of the G8 has also resulted in an ongoing, widespread security operation across Fermanagh with security forces reintroducing armed checkpoints and erecting extensive surveillance infrastructure. These are retrograde and unnecessary actions.

“This security agenda is only facilitated by the actions of paramilitary organisations who have announced their intention to target the G8 summit. In addition to the threat posed to ordinary people and the wider divisive impact of such activities, those tactics are deeply counter-productive. They serve to facilitate those who wish to de-legitimise protest, impose repressive and coercive measures and attempt to shut down popular protest against this event.

“Fermanagh G8 Not Welcome calls on all such groups to immediately cease any planned military actions related to the summit.

“We extend a welcome to all who, for whatever their reasons, wish to avail of their legitimate rights to protest the G8 Summit. We can best do this through peaceful protest which engages and empowers people.”

Protesters are asked to assemble at 6pm at the South West College in Enniskillen on Monday 17th June to make their way to a rally outside the G8 Summit venue. 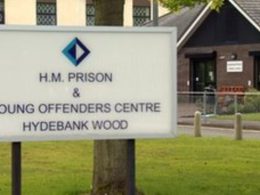 The documentary Nolan Inside Hydebank - in which the well-known presenter spends time in a young offenders' centre - offers an insight into the societal harm that poverty and the lack of vital services can cause.

New road can open up for labour movement if working class relies on its own forces Peter Taaffe,…
byArchive