The 26th anniversary of the Hillsborough stadium disaster in Sheffield, when 96 Liverpool football supporters were crushed to death, takes place on 15 April. Responsibility for this disaster rests with the South Yorkshire police chiefs and the political establishment at the time, who connived to cover up their failings and instead blamed the victims.

Tony Mulhearn, former Liverpool city councillor, and TUSC candidate in the forthcoming general election, comments on the latest revelations from the current inquests into the 96 deaths. Below, are reprinted extracts from articles in the Socialist following publication of the Independent Panel Inquiry findings in September 2012.
In December 2012, after years of campaigning by the Hillsborough disaster survivors and the victims’ families and supporters, and the publication of the Hillsborough Independent Panel’s report, the High Court quashed the “accidental deaths” verdicts of the original inquests. It ordered new ones to be held, which began on 31 March 2014.

The inquests into the Hillsborough stadium deaths are entering their second year. They have been the scene of heartbreak for the families of the victims who have been compelled to relive the horror of those appalling events.Reflecting the unprecedented levels of publicity given to the cover-up, the coroner told the jury they would have to investigate each of the 96 deaths. He added: “We shall consider the experiences and deaths of each one of those 96 individuals.”

The human aspect of the inquest was underlined by Steve Kelly, who lost his brother Michael aged 38. He told the court: ‘In life, he was an individual. In death, he is a number. I want to remove that sequence of numbers from him. I am here today waiting to reclaim my brother.’

The callous disregard for the grief of the bereaved was endemic in the whole police operation. This was revealed by Leslie Jones and wife Doreen who had been brought the body of son Richard, 25, to identify. He said: “Doreen tried to get down to give him a cuddle. But the police officer pulled her up roughly and said: ‘Sorry, he’s the property of the coroner now, you can’t touch him’.”

Layer after layer of the cover up has been peeled back, revealing a conspiracy whose objective was to make the victims responsible for a disaster which was the result of grotesque neglect by the authorities at every level, all the way up to Margaret Thatcher. It was the former Tory Prime minister who made the infamous remark: “The police should not be seen to be responsible.”

The facts of the cover-up are in the public domain and well documented. However, in a rare revelation by a senior participant, retired chief superintendent Duckenfield, who originally claimed that the fans had forced open the gates, accepted that he had lied and that his failures were the direct cause of the deaths of 96 fans.

That the inquest is so meticulous and searching is a tribute to the courage of the families and the incredible levels of mass support from the fans and the wider population.
Hillsborough – eventually, the truth

The report of the Hillsborough Independent Panel has ripped aside the tangled web of lies and cover-up woven by the South Yorkshire police, the government and the army of lickspittles in the press who denigrated Liverpool and the victims of the man-made catastrophe in 1989 that was Hillsborough.

Many who survived the day continue to suffer extreme trauma as a result of their experience. Some suffered personality changes and went to an early grave. Yesterday, the radio airwaves were alive with ordinary people expressing their outrage at the events which followed the tragedy. The police, the Sun, with Thatcher and her government implicated in the cover-up, were subject to excoriating condemnation. The Sun’s later apology was contemptuously dismissed for the hollow gesture that it was.

Role of the state
There can be no doubt that the instructions for the cover up came from the very tops of the state machine. The brutal anti-working class culture of the SouthYorkshire police force which played a leading and pernicious role in crushing the miners in their struggle to defend their jobs and communities was laid bare by this report.

Michael Mansfield QC, who assisted the families, clearly identified the link. The police authorities revelled in an atmosphere of impunity which flowed from the anti-working class outlook of the then Thatcher government. Liverpool was also the city where the Militant-led socialist council in the mid-1980s had resisted the attacks of the Thatcher government by mobilising the support thousands of working class people.

By falsely accusing Liverpool football fans as being drunken hooligans, the ruling classes also intended to denigrate the city’s tradition of militant struggle. Cameron’s frank admission of the cover-up and his apology surprised many. But if he had attempted to continue the cover-up his government could have fallen, he had no choice in the face of the evidence but to admit the truth.

Not only are the families to be applauded for their courage and tenacity in the pursuit of justice, but a debt of honour is owed to them for showing that working class people fired with courage and determination can render the forces of the state accountable.

On the day after the Hillsborough disaster the Sun’s front page falsely claimed that drunken Liverpool fans had urinated on police, pick-pocketed dead victims and prevented police resuscitating some of the victims. It took Kelvin MacKenzie, former editor of the Sun, nearly 25 years to claim to be “sorry” for his paper’s coverage of Hillsborough. Nothing he ever says will atone for the impact of the Sun’s disgusting coverage of the tragedy in 1989. Sections of the media believed – like the police and often in collusion with them – that they could act with impunity.

The Sun was not alone in regurgitating the lies that South Yorkshire Police peddled through a local news agency. But MacKenzie’s role in the “reporting” of Hillsborough was the most vicious hooligan act in the sordid history of Britain’s tabloid media. It was left to the people of Liverpool to rise up in united anger to boycott the Sun. The paper’s circulation in Merseyside fell by more than 200,000 (40%) within days. 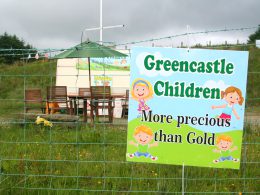 WHEN THE G8 met in Fermanagh we were told that this gang of austerity hawks, war criminals and corrupt politicians where going…
byArchive