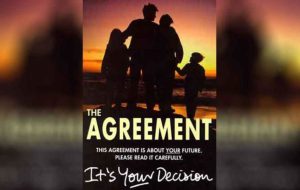 This January marked the anniversary of Martin McGuinness’ resignation as Deputy First Minister and the subsequent collapse of the Stormont Executive in the midst of the RHI scandal which exposed significant issues of corruption at the heart of the institutions, particularly involving Sinn Féin’s partners in the DUP.

In reality though, Sinn Féin’s withdrawal from the Executive had little to do with RHI and more to do with the growing opposition they faced to their implementation of austerity, particularly allowing the Tories to implement welfare reform here. Since then, the two main parties have consciously shifted the political debate away from corruption and austerity and onto the divisive questions which they can more easily manipulate in their interests, leading to sectarian polarisation.

Sinn Féin claim that their position in the on-again, off-again negotiations is about a “rights-based society” and “mutual respect”. Their commitment to rights is simply a matter of political convenience, as demonstrated by their refusal to support a woman’s right to choose. In the South, their members on the committee discussing the anti-abortion Eighth Amendment voted for a more conservative position than members of Fine Gael and Fianna Fáil, the main establishment parties. Many will baulk at Sinn Fein’s idea of “mutual respect”, particularly given the controversial video posted by their MP Barry McElduff on the anniversary of the Kingsmill massacre.

In the past, the DUP opposed the idea of joining a government with Sinn Féin. Today, they blame the problems facing Northern Ireland on Sinn Féin’s refusal to re-enter government but they too are not prepared to concede ground to what Foster has described as “Adams’ radical, republican agenda.” Their approach in the middle of Brexit negotiations was a reflection of the pressure they feel not to concede any ground relating to the “constitutional position” of Northern Ireland.

Proposals to cut the pay of MLAs or move the negotiations to an alternative location with a neutral chair will not deal with the underlying problem, which is that is the current stalemate is a reflection of the sectarian polarisation in society. The two election campaigns of 2017 were best described as the “mother of all sectarian headcounts” and saw both Sinn Féin and the DUP consolidate their positions as the largest political forces in their respective communities at the expense of their more “moderate” rivals.

The need for a budget to be drawn up for the next financial year will pose the question more starkly of whether we have a return to direct rule or power sharing. A recent report from the Department of Finance outlined the possibility of even deeper austerity, including cuts to some departments of up to 12%. The best answer to these threats is not an agreement between the DUP and Sinn Féin – their record in government shows they embrace the austerity agenda. Instead, we need a fighting approach from the trade unions in order push back this threat.

We also need the building of a political alternative to the establishment parties in Stormont. Twenty years of the Good Friday Agreement has delivered an “acceptable level of violence” from the establishment’s point of view, but the last year saw a doubling of paramilitary shooting and attacks, continued sectarian division and neo-liberal policies which are having a devastating effect on working-class communities. Any deal will really be another agreement to disagree on the contentious issues  with unity when it comes to austerity measures. The politics of Unionism and nationalism cannot offer a lasting solution but only continual crisis and the spectre of returning to conflict. Instead, we must rebuild the labour movement tradition, mobilising people in common struggle on the issues that unite working-class communities and seeking genuine solutions to those which divide us in the spirit of genuine mutual respect and solidarity.

“How could the politicians not have told us about this?”  This was the outraged sentiment of over 100…
byArchive