In the 1980s, out of the sectarian tensions that were stirred by the Anglo-Irish Agreement, loyalist paramilitaries tried to step up their attacks on Catholics. In 1986, the IRA announced that any and all civilian workers who in any way helped state forces were considered “legitimate targets”.

By this time, working-class communities were more segregated than ever. But in the workplaces, where Catholic and Protestant workers came together, the basis of a powerful workers’ unity was built. In the late 1980s, workers staged walkouts across the North in protest against sectarian attacks and intimidation, firmly re-establishing the idea of trade union-organised, area-wide protests and strikes. This set the stage for the 1990s, when workers repeatedly took united action against sectarian atrocities.

In January 1992, an IRA bomb killed 8 Protestant workers at Teebane in Mid-Ulster. The Socialist Party (then Militant) organised a local general strike through the Mid-Ulster Trades Council in response. Thousands of Catholic and Protestant workers joined mass rallies. This gave a powerful example, and put pressure on the union leaders to take a similar approach.

Just weeks later, the Sean Graham shootings took place. The response was a 20,000-strong rally at Belfast City Hall in protest, organised by the trade unions. This was followed in 1993 by the 80,000-strong mass protest across the North following the loyalists’ horrific Greysteel massacre. These are just a few examples. These protests played an important role in giving workers confidence to speak out against the ongoing bloodshed, and helped push the paramilitaries towards the 1994 ceasefires.

The fact that workers organised these historic protests through their trade unions highlights the inherent link between sectarianism and the social and economic problems facing working-class people, and gives a glimpse into the potential power of a united working-class party in the North, standing for the interests of workers. Today, workers overwhelmingly oppose any slide back into the violence of the past. Faced with a rise in sectarian tensions, the trade union movement must be prepared to take these kinds of coordinated, area-wide actions in response to any sectarian threats of attacks on workers. 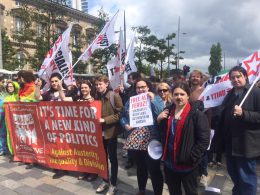