Stream’s announcement of “creating” nearly a thousand new jobs has been labelled a “mirage” today.

Responding to the announcement of 1,000 new jobs in Belfast, Socialist Party spokesperson Paddy Meehan has claimed “in reality these jobs have been shifted from Derry to Belfast. Not a single job has been created. No doubt this will be used to say the economy has turned a corner when all that has happened is these jobs have been re-created down the road.

“Effectively, Stream – a profitable company – has been given in excess of £3 million of public money to sack workers in Derry and switch to Belfast where they will continue to pay poverty wages, with no job security.

“These are the types of jobs that are on offer for young people leaving school or university and for workers getting laid off from the public and private sector as a result of the Assembly’s cuts.

“Peter Robinson and Martin McGuinness have wasted millions of public money jet setting across the world and have failed to create jobs for over 100,000 people in Northern Ireland looking for work. One way they could stop the rise of unemployment is to abandon their austerity policies of cuts to public services which are sucking money out of the economy.”

Royal Mail - NOT FOR SALE! 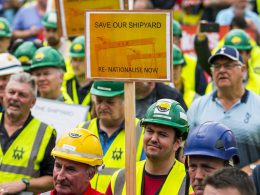