What socialists said Below we re-post an article by Peter Hadden, the then regional secretary  of the Socialist Party, written at the time of the Holly Cross conflict that puts forward a clear anti-sectarian working class, socialist position.

The situation outside the Holy Cross primary school has developed into an ugly stand-off as community leaders talk about trying to settle the conflict. At root, this conflict is about redefining boundaries between Catholic and Protestant areas, which is further polarising the communities.

THE GRIM and shocking scenes outside Holy Cross girls school are a reminder of the danger of sectarian conflict becoming much more widespread. They also serve notice of how bitter and vicious such a conflict could become. Most people in the north, Catholic and Protestant, have been stunned by the sight of young school girls struggling through a tunnel of riot police, stones and verbal abuse just to get to school.

Even if the situation outside the school dies down for a while this is one of those incidents that will have lasting effects. It has already hardened attitudes and deepened the sectarian polarisation. There is also the possibility that some incident or atrocity, a protester or perhaps a child being killed, could trigger other protests and that the violence could spread. The death of 16-year-old Thomas McDonald, run over by a woman driver who chased him in her car after some sectarian incident at the troubled White City/Longlands interface, is an example of how things could get escalate.

Sectarian attacks
What is happening outside Holy Cross follows a summer of widespread sectarian attacks which by now have touched almost every area across the North.

The Ulster Defence Association is behind much of this violence, hiding under flags of convenience like Red Hand Defenders which fool no-one. They are responsible for the pipe and blast bombings, including the bombs thrown outside Holy Cross and ominously for the sectarian killing of two young people, one of whom turned out to be a Protestant.

But the sectarianism is not all one way, despite the misleading attempts by some nationalists to portray it as such. Sinn Fein recently published a centre page in An Phoblacht listing the attacks on Catholics. This is a deliberately one sided approach ignoring the attacks that have also taken place against Protestants.

This violence is intensifying just as the political process is reaching an impasse. The one-day suspension of the Assembly was to allow another six weeks for the parties to come up with an agreement. Then we had the revelations about IRA involvement with FARC guerrillas in Colombia.

Their arrests may not have damaged Sinn Fein¹s standing in Catholic working-class areas but have made unionists more insistent on decommissioning as a precondition of a restart for the Assembly.

The clock is ticking on the six week deadline for a deal and instead of progress we have had the protests at Holy Cross. As time passes a deal becomes less likely.

Workers Solution
All in all, this paints a very gloomy picture. The peace process has never done anything more than bring politicians together at the top. On the ground, in the working class communities, there has been no reconciliation or integration but just the opposite.

Can anything be done to reverse the slide to sectarian conflict? The situation may be difficult but it is by no means lost. The majority of people, Protestant and Catholic, are against a return to conflict and want the paramilitary ceasefires to stay in place or be restored.

While the working class is divided more than ever in terms of where they live, they are still largely united in the workplaces. Where struggles have taken place, for example on wages, conditions, cuts and privatisation, working-class people have stood together and have rocked the sectarians in the Assembly. The victorious struggle by term-time workers is one example.

This unity needs to be built upon so that, instead of being divided, Protestant and Catholic workers can stand together against sectarianism as well as against health cuts, low pay and on other social issues.

That this is not happening is not because working-class people would not be prepared to stand together but because there is no leadership offering them a way to do so. In the past the trade union movement played a key role in challenging sectarianism. Community organisations also helped in this.

Now, instead of offering a lead the present trade union leadership has buried its head in the sand. The unions have joined with the employers, churches and others in the inept and little heard of G7 and play no independent role in fighting sectarianism. Many community organisations are likewise not independent of the conflict but act as covers for various paramilitary interests.

There remain however many genuine activists in the trade unions and in the broad community movement who are repelled by what is taking place and want to find a way out.

These people need to come together to begin to build an alternative to sectarianism. There is an urgent need for a united movement of the working class to oppose all sectarian attacks, to defend workers against intimidation and to combat the poverty that is now common to Protestant and Catholic workers and which is the underlining factor fuelling the conflict.

SOCIALIST YOUTH, the youth section of the Socialist Party in Northern Ireland, has been out in Belfast campaigning for a non-sectarian, working-class resolution of the Holy Cross school conflict.

In its leaflet Socialist Youth argued that if there is no workable agreement reached between both communities then they would be calling on school students throughout the North to come out on a half-day strike to demand that all sides keep schools out of the sectarian conflict.

They also support the call made by some members of the teachers unions for strike action by teachers in Holy Cross and Wheatfield primary schools to make clear that they cannot be expected to work under these conditions, adding that other schools should support them.

Their leaflet concludes by saying: “Instead of standing apart we need to campaign together to halt the creeping privatisation of our schools through PFI, to demand proper resources for the classrooms and to set up a school students union to uphold the rights of all school students.

“Working-class people and young people need to act to stop the slide towards sectarian conflict. Some people are trying to make a comparison with Alabama. The real comparison is not Alabama but Bosnia. No one will win by going down this road. Young people, Catholic and Protestant, will be the biggest losers. We have to act now to stop the sectarian conflict spreading.” 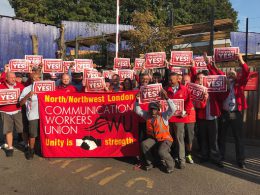