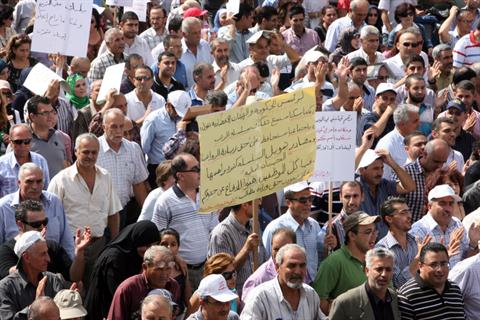 Since 19 February, the public sector and schools in Lebanon have been on indefinite strike. The independent unions have been leading daily demonstrations and there is unprecedented workers’ solidarity. In a period of sharp sectarian divisions and serious security implications due to the war in Syria, independent trade unions (the Union Coordinating Body) called for industrial action. They organised an indefinite strike for the association of public sector employees and the teachers’ union in private schools.

The strike is paralyzing all government departments, ministries and institutions, state and private schools, as well as colleges. These strikes were joined by contractual teachers and retired professors at the Lebanese University. The strike is over the demand for increase in wages which where promised by the government last September. But the pressure of the Economic Bodies‘, made up of bank owners and capitalists, is preventing the government (dominated by an alliance of Hezbollah and the Christian Free Patriotic Movement) from sending the legislation to the House of Representatives. This has forced trade unionists to move to action and go for an escalation.

Strike committees are being formed at meetings and general assemblies in the provinces and regions, and across workplaces, to determine the next steps towards a mass strike. According to statements by unions and workers’ groups, solidarity with the strike is spreading widely across other sectors, some of which are organised, like the printing and media unions and the Bank Employees Union, and among other union members and workers, such as Lebanon Electricity Company and Spinney’s Supermarket workers.

This is an important development in the workers’ movement, as it builds on struggles of workers that had previously been isolated but which can now join a mass strike movement for better wages and working conditions. One of the most important sectors is the bank employees. They have a key role to play because of their relationship to the process of wealth production and profits in the private sector. The next steps in the struggle are crucial for its success and for the victory of the workers’ movement today, if it is to defeat the policies of successive governments defending the profit-making private sector at the expense of the public sector and the working class, in general.
Youth join demonstrations

Also involved in the demonstrations are workers and young people, from outside the main unions, that are calling for the strike action. The Union Coordinating Body, with the Teachers’ Association and the Public Sector Workers’ Association, are now also aware that the struggle they are leading bears with it many responsibilities beyond their unions and that is to include a broad base of support of workers and youth. As the mass demonstration last Tuesday, 26 February, showed, and as was seen in the preparations under way for the mass demonstration next week, this struggle is no longer only around the demand to refer salaries to the House of Representatives. This was only the beginning. Now a section of the working class sees within this movement a serious and reliable space for a another type of confrontation than they had been used to, and many feel that there is hope on the horizon.

But the ruling class, and behind them the owners of capital (the real rulers), are trying to intimidate workers by claiming that wage increases will lead to the collapse of the economy. They oppose wage reforms of any kind, no matter how modest, thus protecting private interests and huge profits accumulated that are intertwined. Their continuous threats about “devastation” if their interests are touched, is to be expected. They are already playing the role of the “lobby” as a class, with an overwhelming influence on public authorities. An evidence of this was the press statement by the Chairman of the Beirut Traders Committee, in which he said: “We are obeyed, do not obey!” It is clear that one of the aims of the authorities and the ruling class is to break the back of the independent trade unions, to stop them inspiring workers and the poor, and to ensure the independent unions are not capable of leading the workers’ movement to challenge their rotten capitalist and sectarian-based system.

At the same time, the authorities and the ruling class find themselves facing a distinct class movement that has grown as a result of their own impoverishing and offensive anti-union policies. They may try to divide the union leadership and may turn to policies of “divide and rule”.

The head of the Economic Body (an assembly of business people ) told a press after a full week of the strike, and after a huge workers’ demonstration, that they will have to sit at a “dialogue table” for everyone to be satisfied. But whatever the explanation or goals of this initiative, this indicates a change, at least nominally, in the intransigent position of the day before where the government was told to reject wage increases. The Cabinet was no less worried about the breadth of participation in the strike and the size of the demonstration but has done nothing more than recognize that the time has come to do something.

The confidence of the Union Coordinating Body leadership has been elevated as a result of the determined mood of public sector workers, on the one hand, and the general feeling of workers’ solidarity, on the other hand. This pushed the leadership to raise the ceiling of demands and to escalate the strike action, leading to an open challenge to the government and all parties inside and outside the government. The workers’ movement is directing its confrontation against the political elite, which is seen as biased in favour of big capital. Annual interest on the public debt is handed over from the state budget to bank owners and wealthy people from Lebanon and the Gulf states.
Government exposed

The government has been exposed in the eyes of the workers’ movement after it announced that it will not implement any measures not agreed upon by the Economic Bodies. The latter has given itself the position of the “guarantor of economic security and social peace” and has announced what looks like a state of “war” on trade unions taking action. The government tried to intimidate striking workers, by pointing to the crisis and the costs of any wage increases, in a failed attempt to break the morale of workers.

Recently the Prime Minister said to the Union Coordinating Body: “Between the collapse of Lebanon’s economy and its becoming like Greece, if wage increases are approved, and the possibility of a two to three-week long strike, I choose the strike”. He had also announced in a statement to a gathering of businessmen on 16 February that “the cost of general strike, no matter how long that would last, would cost much less than the cost of passing the legislation on wage increases”!

The ruling class has failed to defeat the strike movement despite threats and intimidation. They have been incapable of controlling the situation after it became known that the private banks, to which the state owes 60% of the public debt, have made profits of USD 1.62 billion in 2012. The government pays about USD 4 billion a year, in interest, on the public debt, which has reached a record of USD 70 billion. This is paid from USD 15 billion revenue collected by the state.

The 27 February mass demonstration saw a qualitatively unprecedented level of striking workers take part, and young people and workers from outside the unions calling for a strike. The president of the Union Coordinating Body, Hanna Gharib, spoke to the demonstration: “Despite the enormous size of this demo, this is not the peak of the movement, but a clear signal and is the beginning of an uprising involving popular classes and for the first time involving workers from outside the rank and file of teachers and public sector employees”.

Gharib also sent a message to the government and the opposition: “This is a snowball that will get bigger every day, will keep attracting more of those affected, and which will not be possible to control after a while”.
Class polarisation within sectarian parties

Several major parties have begun to feel concerned about the expansion of the strike and the growth of the demonstrations, and have started to rearrange their positions. The main forces, Hezbollah, the Amal Movement and the Free Patriotic Movement, have all called for finding a quick solution, fearing to have to face workers. Schools run by Hezbollah have not seen teachers join the strike but teachers affiliated with Hezbollah but working in public and private schools have been on strike and participated in demonstrations, as is the case with many of the other major political parties.

In an unprecedented way, the strike leaders have become the most prominent figures among a layer of workers and youth in Lebanon, reflecting the existing and growing mood of class consciousness amongst a section of the working class. This is an illustration of the powerful alternative force capable of ending sectarianism and poverty, that is the workers’ movement. But so far, union leaders are not linking the sectarian political crisis with the class struggle, and have not yet appealed to other workers to join the struggle, especially workers in private companies, which are the backbone of the economy, and unemployed youth, who account for 34% of working youth age (20,000 of whom emigrate each year).

It is important to make a link between the current workers’ struggle and the need for unity against the sectarian divide, by linking leaders of sectarian-based parties and their struggles for power and office and their often hidden economic alliances against the working class. But this union leadership, while it is trying to escape as much as possible from political matters (as if issues are separate!), bears a historic responsibility to build on trade union unity and to initiate the formation of a workers’ organisation to challenge public authorities and the rule of capital. The Left and the trade union movement in Lebanon can learn, from historical mistakes, to no longer separate between class struggles and other issues, such as sectarianism, resisting occupation and imperialism.
Economic alternative

What is needed is an economic alternative, to not only fund wage increases but that is in the overall interests of the working class. This would help to expand the movement, to include all of the working class and youth. To develop this movement there is a need for the establishment of a mass workers’ party, under a socialist programme, to unite the working class against the ruling financial oligarchy, whose politicians’ policies of impoverishment and sectarian divide and rule polices threaten over time to take the country towards a new civil war. These reactionary forces are already responsible for deepening the sectarian divide to levels not even since the 1975-1990 civil war.

If the opposition movement is limited to strikes and demonstrations, despite their importance, without an alternative strategy and action plan to split the working class from the leaders of the sectarian parties and big business, the current industrial movement is at the risk of either running out of steam, or being cut across by a security deterioration sparked by sectarian, reactionary forces. Now is the historic opportunity to establish a mass workers ’party. A new party for workers needs an alternative economic and social programme, demanding the nationalisation of the major companies and banks, under workers’ control and management, to end waste and corruption, and for a socialist alternative to abolish class exploitation, poverty and war.