Licenses have been issued to Tamboran, an exploration company, for the exploration rights for the Lough Allen basin spanning Fermanagh, Leitrim and Cavan. They “promise” up to 800 new jobs but despite the economic depression, few are welcoming the exploration and resistance is growing.

There are good reasons to be concerned with fracking. The first is the water/sand pumped is mixed with dangerous chemicals including carcinogens and toxins. Only 40% of water pumped into the ground is retrieved with the remainder leaching into subterranean rocks and water supplies. The US film ‘Gasland’ shows residents setting fire to their tap water as methane has entered ground water. Fracking at Blackpool was halted after two minor earthquakes were caused by the process.

The water that is recovered is contaminated with heavy metals, salts, benzene, petroleum and potentially radiation, which is collected as ‘mud’ which must be retained in tanks before being dumped elsewhere. Traffic accidents in the transport of this mud can result in severe pollution.

The visual impact will be severe: it is being projected that a concrete nine-acre site will be built every 3 kilometres; the new jobs promised will be easily offset by job losses in the tourism sector. Agriculture is also at risk as all it would take is one benzene spill to destroy the reputation of local produce.

Of course Tamboran has told everyone that there is nothing to be scared about; they have promised not to use any chemicals – a world first! However, subsequently they have admitted that they will have to use biocides and lubricants. Locals are concerned that the company may sell its rights to a multinational and in that case Tamboran would not use chemicals as the multinationals would use them instead.

Politicians either side of the border have been very slow in opposing the process. Arlene Foster (DUP) signed away the exploratory licenses pointing to the potential job creation. Meanwhile, Sinn Féin despite their verbal opposition have not opted to use their Ministerial position in the Department of Agriculture to block the leasing of land by the Forest Service to Tamboran. There is strong opposition locally. Crowds of 700 at Carrick-on-Shannon and 250 in Enniskillen strongly opposed the proposal. Meanwhile the Anti-Fracking campaign has organised its own information nights.

The Socialist will continue to cover this issue over the coming months. A more detailed article on this subject is available on www.socialistpartyni.net 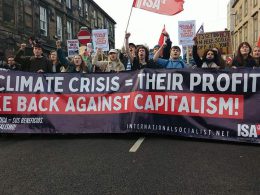 By Eva Martin The world’s climate and natural systems are at a breaking point. A recent IPCC report…
bySocialist Party 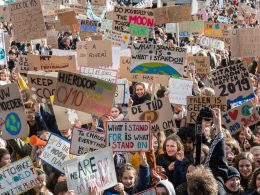 COP26 must be a target for those who wish to avert climate catastrophe. Mass protests at this conference…
bySocialist Party

During half term holiday we went over to Barton Moss, Manchester to join the protest against fracking. At…
byArchive