The Gulf stream’s warmth stretches from the tip of Florida northwards along the US East Coast. It is one of many currents in the thermohaline, or Atlantic meridional overturning circulation (AMOC), an essential system credited for the hospitality of the Northern hemisphere. It carries warm water from the Tropics to the North Atlantic “like a conveyor belt,” as climate scientists have aptly described, amidst serious concerns of AMOC weakening and possibly eventually stalling altogether.

The Gulf stream’s warmth stretches from the tip of Florida northwards along the US East Coast. It is one of many currents in the thermohaline, or Atlantic meridional overturning circulation (AMOC), an essential system credited for the hospitality of the Northern hemisphere. It carries warm water from the Tropics to the North Atlantic “like a conveyor belt,” as climate scientists have aptly described, amidst serious concerns of AMOC weakening and possibly eventually stalling altogether.

AMOC’s current pace – its slowest in 1600 years(1) – urgently puts into question the necessary steps to solving the climate crisis, and whether these will ever be possible under a capitalist system so ruthlessly tied to the pursuit of profit. Further unlining the urgency, it is witnessed alongside a summer of bludgeoning natural disasters across the globe.

The fast and strong state it has kept up in recent millennia is primarily responsible for the relative warmth of the Northern hemisphere, particularly countries like Ireland, but it is on a decline. Data from the last 100,000 years shows that AMOC can fall back to a more unstable and slower state within a matter of decades. Today’s slowing isn’t because of natural changes in flow but a direct response to our planet’s warming, as outlined in a recent report from Niklas Boers of the Potsdam Institute for Climate Impact Research which analysed eight independently measured datasets of temperature and salinity.(2)

Levke Caesar of Maynooth University agrees that Boers “presents evidence that the AMOC has already lost stability, which I take as a warning that we might be closer to an AMOC tipping than we think.”(3)

This could be an overwhelming predicament – AMOC has a heightened status in our environment as a massive heat and carbon sink. The sixth UN Intergovernmental Panel on Climate Change (IPCC) report released last week found that 56% of CO2 emitted into the atmosphere since 1960 has been absorbed by forests, soil and oceans.(4) These carbon sinks are already becoming saturated and losing efficacy, but a collapse of a key circulation system could be a disastrous tipping point for our climate.

In all of the five greenhouse gas scenarios projected by the IPCC, a temperature increase of at least 1.5° Celsius above pre-industrial levels is reached by 2030, and any increase beyond this bodes “progressively serious, centuries-long and, in some cases, irreversible consequences.”(5) This is not because of magic numbers that cause an immediate environmental shutdown, but because small quantitative changes in temperature build-up to trigger a large-scale qualitative change to the environment through tipping points.

The stalling of AMOC would lead to increased droughts in South Asia and West Africa; stormy weather in Europe; pushing up sea levels along the US East Coast, endangering the Amazon rainforests Antarctic ice sheets.(6) This in turn causes sea levels to rise and melts arctic permafrost, where the unfreezing soil releases potent methane gas, contributing to further heating unfurling the very worst effects of the climate crisis that makes our planet increasingly hostile to human life.

This must be avoided at all costs. Yet when world governments fail to meet minimal targets under the “voluntary” Paris Agreement in 2015, and often write off tipping points because they are difficult to quantify, it can be easy to lose all confidence in the potential to get the climate crisis under control. Scientists including Boers himself caution against such pessimism – no matter how dire the state of the environment is today, no tipping point is inevitable…

The IPCC report contains a colossal amount of data that draws on the exponential increase in greenhouse gas emissions since the onset of capitalism to substantiate the idea of the central role of “humanity” in spurring on the climate crisis. Yet exploitation of the planet isn’t written into human nature. Rather the nature of the capitalist class of billionaires, big business owners and establishment politicians is to increase the profits of their wealthy few to uphold the capitalist system. Thus the environment is seen as an infinite pit of resources to drain and reign over because that is what is most profitable today.

Far from being tethered to these destructive methods, ordinary working-class people’s needs and desires are in contradiction to capitalist profits – in fact, as workers, we are exploited and oppressed by the very veins of those that exploit the planet. This is especially true for those facing the worst pay and conditions at the frontlines of sectors such as oil rigging and mining.

School student strike actions revitalised the ecological movement and forced many capitalist governments to accept the reality of the climate crisis – yet they will always promise too little, too late. The last time the atmosphere was as warm as it is today sea levels were up to ten metres higher, which would submerge many of our major coastal cities; and twenty-five metres higher three million years ago, when CO2 was as concentrated in the air as it is today.(7)

Let’s mobilise to save the planet

The climate crisis is brutally unfolding before our very eyes – the stark heatwaves across the west coasts of the US and Canada saw temperatures so high that dozens died without the luxury of air-conditioning. The summer has also seen wildfires ravage countries throughout Europe, and flooding bringing villages and towns across Belgium, Germany and China to rubble.

Mass pressure must be organised in the lead-up to the COP26 conference. We need an immediate transition to a zero-carbon economy – this means fighting for policies such as free, reliable public transport and a major investment in renewable energy, linked to an end to the reliance on fossil fuels. We need to snatch power away from profiteers, demanding the nationalisation of key sectors of the economy – from transport and housing to healthcare and education – under the democratically-elected control of workers in these industries, who have both the knowledge and experience to make the necessary decisions in the interests of working-class people and the planet.

Socialists, like scientists, are not fortune tellers – we cannot predict the exact timing of tipping points such as the stalling of the Gulf stream and AMOC. However, we know that there is little stopping them from taking place under the current system – only a break with the profit motive in a world where production and investment is democratically planned for the lives and safety of the majority can we end the evils of over-production and pollution. The climate crisis adds urgency to the task of building a force capable of bringing this rotten system to its knees. As part of the International Socialist Alternative (ISA), the Socialist Party is mobilising our members and supporters to Glasgow for COP26 this November. If you are interested in joining us, please fill out this form to speak to a socialist activist and to discuss how you can be involved in the struggle for a sustainable future and a socialist world free from oppression & exploitation.

The huge multinational Tamboran wants to begin massive exploration for natural gas in Ireland, drilling 1,600 wells in Fermanagh and Leitrim using the dangerous hydraulic fracturing technique, or “fracking” as it is more commonly known.

How would socialism work? And how could it help stop climate change?

Humanity is at one of the most important crossroads in its 200,000 year history. Having spread across the…
byArchive 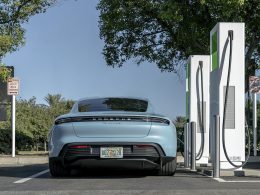 Electric vehicles (EV) are hot news. Sales worldwide soared in 2020, increasing by 43 percent over the previous year. Automakers and governments are embracing new EV markets and pushing them as one of the most important solutions to climate change.