It is positive to see the ongoing protests against Dalradian Gold’s plans for mining in the Sperrin Mountains and storing cyanide on site. This threatens a potential leak into the local water supply, as has previously happened in Romania, causing a massive fish kill. As has been seen recently, fracking is back on the agenda, with Cuadrilla’s site at Preston New Road in Lancashire. There have been more than 30 tremors since fracking resumed last month. This is a lesson to us in Northern Ireland. Fracking was stopped in Lanchashire in 2011 and it has now resumed again so there is no guarantee that there will not be an attempt to resume fracking here either. That is why it’s important to be ready to resist fracking, as was successfully done in Belcoo and Woodburn Forest Park.

The halt on fracking that Stormont announced in September 2015 did not rule out fracking in the future, as it stated that the position will change if the department is satisfied that there is sufficient and robust that fracking will not have a detrimental impact. Despite the fossil fuel companies’ claims that fracking is a cleaner method of extracting gas, it has been proven to increase emissions of methane gas and it has also damaged water supplies. Methane gas emissions are more damaging to the atmosphere than CO2 emissions. This shows the hypocrisy of the Tory government trying to promote fracking as a cleaner source of energy.

Three men were jailed for more than a year each for protesting outside Cuadrilla’s site in Lanchashire in July 2017. Even though they have since been released on appeal, this was an attempt by the state to send a message that peaceful protests against fracking would not be tolerated. Not only was it a first for anti-fracking protestors to be jailed but the defendants were also denied their right to speak in court about the reasons for their actions. The judge, when sentencing, stated that he thought the three men posed a risk of reoffending and could not be rehabilitated. These words set a dangerous precedent.

It is positive to see the ongoing protests against Dalradian Gold’s plans for mining in the Sperrin Mountains and storing cyanide on site. This threatens a potential leak into the local water supply, as has previously happened in Romania, causing a massive fish kill. The local residents also have concerns over radon levels in the area. We need to show solidarity with the protesters in Tyrone and Derry and also the protests in Lanchashire against fracking. With the recent global warming reports, it’s more important now to fight against the greed of fossil fuel companies and demand cleaner, greener forms of energy. 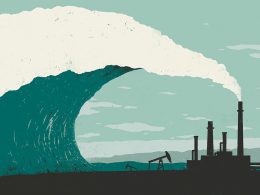 Why the Climate Crisis is a Capitalist Crisis

The question of economic growth and its relation to the climate crisis is a subject of increasing discussion. Here we offer a Marxist view on this critical issue for the environmental movement.
bySocialist Party 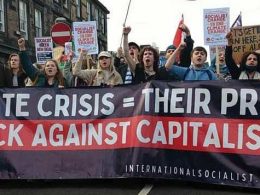 By Bill Hopwood The deadly, and frightening, impacts of mounting climate change are clear for all to see.…
bySocialist Party
14 shares
14
0
0