There are four licenses for gas exploration around Northern Ireland and in three cases the company’s holding the rights have announced plans for exploratory drilling this Summer. Tamboran Resources in Belcoo, West Fermanagh, Rathlin Energy at Ballinlea, North Antrim and Infrastrata Plc in Woodburn Forest, near Carrickfergus in South Antrim.

It remains unclear whether this exploratory drilling will involve single-frack explosions at the base of wells but this specifically allowed for in the license agreement in Fermanagh. In any case, exploratory drilling will see the fracking companies put down infrastructural bases in the licensed-areas and protesters are readying themselves to oppose drilling at all three sites.

The drilling phase is not without risks. Indeed, in some regards, it is more risky than full-blown well fracking as those who are sinking the well do not know what they are likely to encounter. The drill can be done with fluids or dry and in either case different risks predominate. Drilling with fluids (many of which are toxic) can result in large quantities of chemicals being ‘lost’ and finding their way into adjoining land or aquifers. Dry drilling tends to raise more radioactive material as wells are bored through granite (which naturally contains small traces of uranium).

These are not the first wells to be fracked in Ireland, however. The first well fracked was in Dowra, Co Cavan back in 1981 (albeit with a very different and less intense process). Five wells (including the one previously fracked) were then fracked in Cavan and Fermanagh in the late 1990s, none of which were deemed economical using the less intense fracking of the time. Despite the low density and low intensity of the fracking used at the time, information gathered from local people suggests that two of these five wells have suffered well-casing failure. Local authorities refuse to answer basic questions about the sites but local people in Cashel, Fermanagh tell of seeing flames rising high above the well in what is thought to be an explosion following a well-head failure. They also recall a large number of vehicles coming onto the site shortly before it appeared to be recapped. An emergency meeting has been called to discuss how to mobilise opposition to stop any drilling taking place. 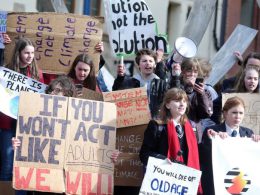 By Kevin Dale, Brighton Socialist Party Hundreds of protesters have set up camp in the small village of…
byArchive

Socialists and environmental activists in Russia are campaigning against the construction of a road through the Khimkinskii forest, which is one of the major greenbelt forests near Moscow. Following recent brutal attacks against CWI members in Moscow on 7 August and also against an environmentalist activists’ camp, the CWI in Russia calls on socialists, trade unionists and environmental activists worldwide to take protest action against Vinci Construction. This French based multi-national company is currently the main contractor on this 43 kilometer stretch of the proposed new Moscow St Petersburg highway, a contract worth 1 billion euros.