Sinn Fein and DUP to cut benefits… after the May elections!

While Sammy Wilson and other right-wing zealots attack Sinn Fein for allegedly “resisting” the passing of the Welfare Reform Bill through Stormont, Sinn Fein MLA Alex Maskey let it slip on BBC that his party will not “kill the bill” but will eventually vote it through the Assembly.

Maskey and his cohorts have cynically decided to postpone their support for cuts to benefits until after the May elections. Maskey claims they will do everything in their power to protect the worst off by making amendments to certain changes in the Bill, such as not introducing the bedroom tax.

But these changes will be a drop in the ocean compared to the amount of cuts in all sorts of benefits for workers, pensioners and the unemployed.

Make sure to challenge them when they coming knocking on your door – simple question: Will you vote in favour of benefits cuts?

Looking after their own 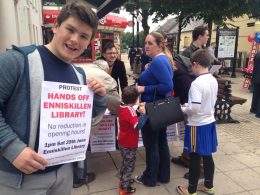