Assessments run by Atos on behalf of the Department for Work and Pensions should be scrapped and the work brought back in-house.

The PCS, which represents almost 80,000 of the DWP’s 100,000 staff, was commenting after MPs on the public accounts committee criticised the government for its treatment of sick and disabled people forced to undertake a work capability assessment.

But the union also criticised the committee for blaming the lack of “a competitive market for medical assessment providers”.

The key problem is not Atos’s monopoly, it is that the policy’s primary aim is to remove vital benefits from some of the most vulnerable people in society, and that spending cuts and the profit motive are driving decisions.

If companies were allowed to operate in a competitive market the quality of assessments would suffer even further in the race to cut costs to win contracts and make profits.

Instead the government should scrap the work capability assessment, bring the work back in-house and establish a fair, humane and inclusive system of assessing people who are entitled to benefits, alongside proper investment to create sustainable jobs and training opportunities.

A House of Commons motion – submitted by the chair of PCS’s parliamentary group, John McDonnell, and currently the eighth most supported among MPs with 118 signatures – “applauds the British Medical Association call for the work capability assessment to end immediately”.

from a Public and Commercial Services union (PCS) press release

"Tell the truth Poots - A&E closure down to Assembly cuts"

Peter Mandelson’s plans to sell off 30% of Royal Mail and allow for up to 49.9% to be privatised, are facing mass opposition. A recent poll carried out by the Communication Workers Union shows 75% of the public oppose privatisation.
byArchive
1 share
1
0
0

The strike called for 10 May represents a new stage in the battle to defend public sector pensions. Civil service union PCS will be taking action along with Unite members in health and the civil service and hopefully lecturers' union UCU, Northern Ireland public sector union Nipsa and others. 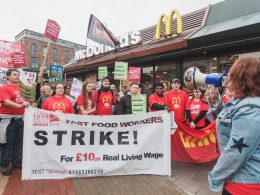