The crisis in our health service is getting worse as a result of cuts to budgets and staff. Waiting lists have jumped a staggering 30% in the past year as fewer staff struggle to deal with patients in fewer hospital services.

More than 127,000 people are currently waiting for a first appointment to see consultants or for tests. The list has risen by 27,000 since last year, with steep increases of those waiting in excess of 15 weeks. So much for Stormont’s pledge that nobody will ever have to wait 15 weeks for treatment!

The much-heralded ‘Transform Your Care’ (TYC) has been a disaster. All the parties in the Stormont Executive support TYC which has meant continued cuts to services and the extension of privatisation of the NHS. TYC also threatens the introduction of charges to see GP’s and other essential services. Health Minister Edwin Poots has come under a lot of criticism for the health crisis from ordinary people. But the hypocrisy of politicians from other parties attacking Poots while supporting TYC is sickening. Beyond TYC, most parties in Stormont voted for the budget which saw real cuts to health. In the past 3 years, GP services have seen their funding cut by more than £5million, and community services by over £2million. Poots decision to close Belfast City A&E unit was supported and voted for by Sinn Fein, yet they opportunistically and dishonestly speak out against the crisis at the Belfast Royal Victoria Hospital A&E!

The longer people have to wait for first appointments they greater the chance of people suffering and dying. This is happening when private companies are expanding in the NHS. In the past year alone £45million of public money has been given to private healthcare companies. This money alone could recruit many nurses and staff needed to alleviate the pressure on patients and staff in the NHS in the north.

The trade union movement must resist the cuts to our health service. Words of condemnation and protest from trade union leaders are not enough. NHS staff are working in horrendous conditions. Lives are being lost and there is no sign of things getting any better. Action is needed to stop the NHS cuts. When Poots and the health Trusts attempted to evict elderly patients from carehomes, it was met with defiant and militant action from patients and staff which received mass public support. Pickets were put on Trust headquarters and protests took place outside carehomes. Patients took to the airwaves to demand that carehomes should be kept open. The political pressure paid off – Poots was forced to abandon the closure of carehomes for the time being. This shows that even a relatively small number of people can take on weak politicians in Stormont.

The Socialist Party is campaigning for the trade unions to build for a mass regional demonstration in the Autumn to demand an end to cuts and privatisation in the NHS. NIPSA members passed a motion at their recent conference supporting this call. Trade union members in all unions should raise motions through their branches and all levels to demand a Northern-wide demonstration. Meetings on health cuts need to be organised within the unions, workplaces and communities to build support for a demonstration.

For model motions and advice on how you can get involved contact us at info@socialistpartyni.net or phone 02890232962. 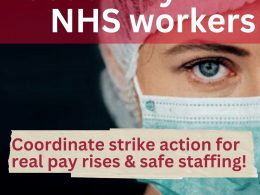 Solidarity with NHS workers: Strike together to save our NHS

For years health and social care workers have been treated with disdain by politicians in Westminster and Stormont.…
bySocialist Party