The proposed weekend closures of A&E units in Lagan Valley and Downe Hospitals will “put unsustainable pressures on already over-stretched A&E services at the Ulster Hospitals and inevitably putting lives at risk.”
Pat Lawlor of the Socialist Party claimed the “excuse of staff shortages as a justification for these closures is a disgrace and a red herring as the Health Board and Assembly Executive’s real agenda is region-wide cuts across all parts of our health service. The reality of the situation is the Assembly’s austerity measures are causing wholesale suffering. These closures are part of these measures and can only result in people needlessly dying”.
“It must be remembered that A&E services at Lagan Valley and Downe have already been cut. In 2011, A&E services in both hospitals were cut from a 24 hours to 11 hours. The reality is it is the intention of the Assembly Executive and the Health Board to run down these service to the point they can close these units entirely.”

“The Assembly Executive plan to run down A&E services across Northern Ireland has been recently exposed by a recent inspection and report by the College of Emergency Medicine. This report shamefully showed the intolerable pressures within A&E departments as a result of underfunding for many years.”
“The Socialist Party believes these cuts and closures can be stopped by mass opposition of health workers and local communities through public protests and co-ordinated industrial action by the trade union movement. The Socialist Party will continue to campaign against these cuts and fully support and participate in any genuine campaign that is developed to defend our health services.”

2014 - another year of mass struggles beckons 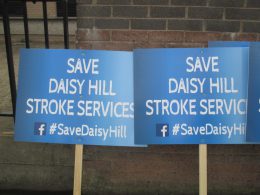