Amber Rudd made an “inadvertent” mistake. That was the ludicrous claim made by the outgoing home secretary in her resignation letter. Families have been pulled apart and cancer patients denied treatment. People have lost homes and jobs. They have had their lives turned upside down and thrown into chaos. All the while, the Home Office has sought to turn the screws, with targets for both increasing and fast-tracking deportations. 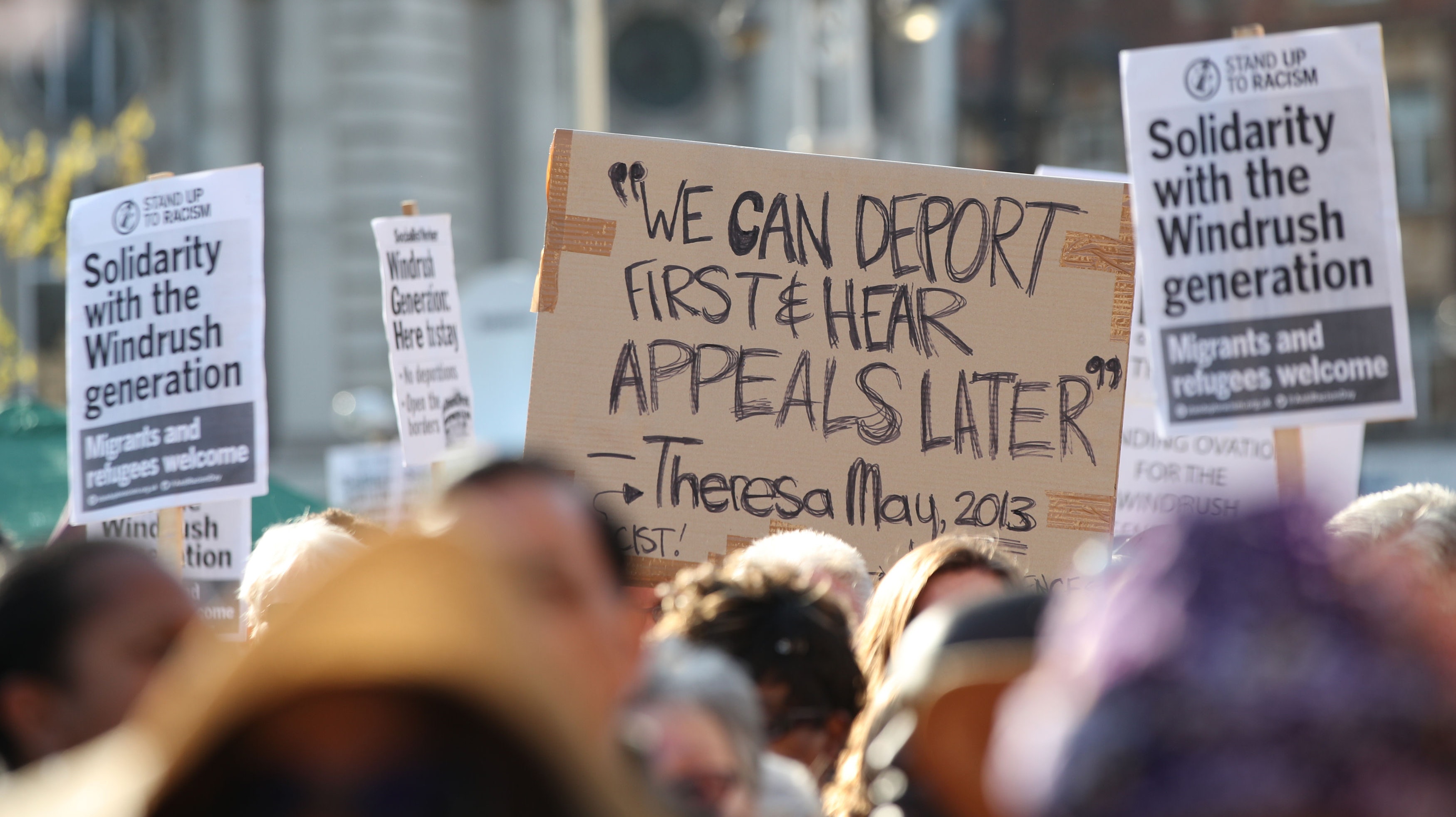 Amber Rudd made an “inadvertent” mistake. That was the ludicrous claim made by the outgoing home secretary in her resignation letter. Families have been pulled apart and cancer patients denied treatment. People have lost homes and jobs. They have had their lives turned upside down and thrown into chaos. All the while, the Home Office has sought to turn the screws, with targets for both increasing and fast-tracking deportations.

These were targets which Rudd personally ordered and signed off on. Now, exposed as a liar for denying their existence, and faced with mass anger among working class people, she has been forced out. Good riddance. But this by no means draws a line under the issue. The Windrush scandal has exposed the callousness of this Tory government afresh. May has sought to erect a firewall between herself and Rudd, claiming that the hostile environment policy – of which the prime minister was chief advocate and architect – had nothing to do with the home secretary’s resignation.

Rudd was a key ally to May in the cabinet. Her exit has substantially weakened a prime minister who was already teetering on the edge. It has been widely welcomed, especially by those at the sharp end of the government’s racist policies. But responsibility for this scandal, as well as for all the savagery of this austerity government, goes beyond one minister. As Jeremy Corbyn rightly commented, “Amber Rudd has been the human shield for Theresa May, and she’s now gone.” Corbyn must now draw the obvious conclusion from this and boldly lead the call for the prime minister to resign. He should demand a general election. May must go. The Tories must go. The policies that have led to the Windrush outrage are not aberrations. They are not mistakes or mishaps. They go hand in hand with cuts, austerity, and privatisation. They are part and parcel of this government’s systematic disregard for the lives and living standards of all working class people. This could not have been summarised more clearly than by the appointment of Sajid Javid as Rudd’s replacement. Javid is a man who, as communities secretary, presided over the horrific Grenfell disaster and its aftermath.

He stood by while hundreds of surviving families were forced into temporary accommodation and denied even the most basic of government support. And Rudd isn’t the only cabinet member to have been caught out for their ‘inadvertent errors’ recently. NHS axeman-in-chief Jeremy Hunt is now under investigation for allegedly breaching money laundering rules. He was apparently given a bulk discount on the purchase of seven luxury south coast properties by a Tory donor – the sort of ‘mistake’ only a multimillionaire like Hunt could make. This government of the rich is embroiled in scandal and crisis on multiple fronts. It is also a government dogged by bitter internal division. There has been a further intensification of what is, from the point of view of May’s government and the capitalist class more widely, an intractable crisis: the Brexit negotiations.

The EU’s chief negotiator, Michel Barnier, threatened the collapse of negotiations unless a resolution was found on the question of the Irish border. Meanwhile, the government suffered a fresh defeat in the House of Lords on the question of whether there will be a parliamentary vote on any potential deal. This defeat was only made possible by the support of 19 Tory peers – a small glimpse of the enormous crack which runs right down the middle of May’s party. We have a government that is weak, divided, and on its knees. The workers’ movement must act now to sweep it from the stage. The Trade Union Congress (TUC) has called for a national demonstration to take place on 12 May. At the moment, the march is being organised under the unclear slogan “a new deal for workers”. This must now be transformed into a mass protest to kick out the Tories.

The TUC’s leadership should mobilise on the basis of clear slogans, explicitly calling for the resignation of May, and for a general election. If they did so, this protest could potentially be enormous. Indeed, if bold demands were combined with a serious approach, both to mobilising trade union members and appealing to all working class and young people, it’s even possible that this demo could reach a similar size to the 750,000-strong march which took place in 2011. That was an event which led directly to a 2 million-strong strike of public sector workers later in the year. If the TUC was willing to break with its current passive approach, and fight to mobilise mass struggle – including organising coordinated strike action – it could build a movement capable of bringing down this hated government.

Corbyn also has a responsibility in this situation. He has correctly attacked the government over the Windrush scandal, including demanding Rudd’s resignation. But he has stopped short of making an explicit call for May to go, or for a general election. What’s more, Corbyn should be prepared to actively call on working class people to take to the streets and organise to get the Tories out. As a starting point, that means encouraging all his supporters to mobilise for the TUC demo on 12 May. Corbyn has partly been hindered in his ability to land clear blows against the government by the persistent attempts to undermine his leadership being made by the Blairites and their friends in the right-wing media.

The effect of this has been to help take the heat off the Tories over crucial issues, including Windrush. Most recently, the campaign of slander and smear has taken the form of a co-ordinated attempt to create the (false) impression that anti-semitism is rife within the Labour Party and is especially prevalent among Corbyn’s supporters. This resulted in a march of roughly 50 Labour MPs to accompany their Blairite colleague, Ruth Smeeth, to give evidence at the disciplinary hearing of Labour Party member Marc Wadsworth. This march was clearly intended to further build pressure towards his expulsion. Marc Wadsworth had been placed ‘in the dock’ for accurately pointing out that Smeeth had been briefing a Telegraph journalist on the way into the meeting announcing the findings of the Chakrabarti report. Outrageously, Marc Wadsworth has subsequently been expelled from the party by the national constitutional committee. If this ruling is allowed to go unchallenged, as it so far has – both by Corbyn and by the leadership of Momentum – it will set the tone for a further escalation of the witch-hunt against left-wing Corbyn supporters.

After almost three years, the approach of the leadership of the Corbyn movement – of attempting to pacify the Blairites through, at best, failing to actively challenge them and, at worst, acceding to many of their demands – has been proven to be utterly ineffective. Labour remains two parties in one. On the one hand, there are the tens of thousands of members who joined the Labour Party in order to support Corbyn. On the other, there are the right-wing Blairites. It is this Labour Party – the party of cuts, tuition fees, privatisation and war – that continues to dominate in parliament and the council chamber, as well as in much of the party’s machinery. The capitalist system is itself a ‘hostile environment’ for all working class people. It is not coincidental that those Labour MPs most viciously attacking Corbyn on the supposed basis of antisemitism, were the very same people who, in 2014, voted for the Tory immigration bill which ultimately led to the Windrush scandal. This includes figures such as Yvette Cooper, who has nauseatingly attempted to take credit for Amber Rudd’s resignation, and who has been lauded by right-wing commentators. The vast majority of Labour MPs did not oppose the bill – only a few like Jeremy Corbyn and John McDonnell did.

With the government on the ropes, it is vital that Corbyn is prepared to go on the offensive against all the representatives of the capitalist class – including those who sit behind him on the Labour benches. This means fighting for a clear, socialist programme, based on democratic, working class control over resources and the economy. It means supporting the democratisation of the Labour Party, including measures such as mandatory reselection of MPs to give members and trade unions democratic control over who represents them at elections. It means opening up the Labour Party to all genuine, socialist forces, including the Socialist Party, so that they can participate on a federal basis.

Editorial of the Socialist (England & Wales) 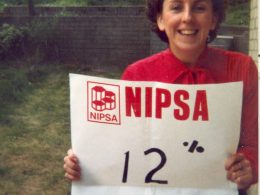 On 14th October 2017, our comrade Hilary Coleman lost her short battle with cancer and passed away peacefully at the Marie Curie Hospice in East Belfast with her husband Ciaran Crossey, her daughter Nicola and other family members at her bedside. On the 17th October, Hilary’s family, friends and comrades gathered to say farewell and to celebrate her life.
bySocialist Party

Trotskyism has been in the news since Tom Watson, deputy leader of the Labour Party, accused some new…
byArchive 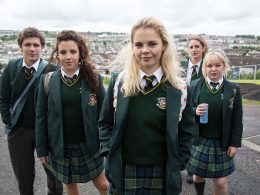