Not a day goes by without more headlines and stories being published about the deepening cost of living crisis and the devastating impact it is having on millions of people. Recent figures produced by the Office for National Statistics (ONS) revealed that more than 16 million people in Britain have been forced to cut back on food, whilst around 24 million reduced energy usage in their homes between March and June, in the face of soaring bills. Scandalously, as energy and oil companies boast bumper profits, the energy price cap is due to skyrocket to £3,359 in October and £4,266 by next January with some predictions it could go even higher!

This is all against a backdrop of 10 years of vicious austerity, pay restraint and attacks on workers’ living standards. Young workers have been hit most of all, which is borne out by a recent Resolution Foundation report, aptly titled ‘Stagnation Nation’, which observes that every worker aged 31 and under “has never worked in an economy with sustained average wage rises”. That amounts to a quarter of the labour force who have never seen work provide a rising standard of living.

However, as Socialist Alternative has previously observed, workers are getting angry and beginning to get organised. In the twelve months before April 2022, the Trades Union Congress (TUC) had logged at least 300 disputes in a multitude of different industries. Meanwhile, between October 2021 and March 2022 GMB members entered into dispute with 42 employers, which is seven times the number of disputes in the same period of 2019–20.

Given the crisis and the increasingly bleak situation being faced by workers across all sectors of the economy, it isn’t just those that are organised in trade unions that are taking action. For example, at the end of July, workers at a food firm in Bury, Greater Manchester, took wildcat strike action over low wages, working conditions and management bullying. The factory, which is run by Cranswick Continental Foods, is not unionised, but that didn’t stop more than 100 workers taking part in pickets across two days of action.

One told the Manchester Evening News that, “We need better conditions, and to be treated like human beings and the wages have to go up — they have to do something about it. We are on the minimum wage working in hard, cold conditions.”

This speaks to the explosive nature of the workplace today, where workers are under huge pressure and struggling to survive on poverty pay. Unofficial action in non-unionised workplaces is likely to be an increasing feature of the strike wave that is currently spreading across the country.

The recent action taken by Amazon workers is extremely significant, particularly in how quickly it has spread across the country. On Thursday 4 August, hundreds of workers at the Tilbury warehouse in Essex staged a sit-down strike over a measly 35p per hour pay rise. By the following Wednesday, the action had spread to Dartford, Coventry, Bristol and Swindon.

It is no secret that Amazon is unashamedly and viciously anti-trade union, using a range of tactics to prevent organisation. However, Amazon and Bezos can be beaten and workers here should take inspiration from the US, where members of Socialist Alternative have been instrumental in supporting and helping to organise the fight to unionise Amazon in several cities. We stand in full solidarity with workers who are moving into action here, and our members will do whatever we can to support them.

“The working class is back”

During the first round of national railway strikes in June and on the back of what has been termed as ‘the Mick Lynch effect’, after the numerous television appearances made by the RMT General Secretary, there was a surge of interest in unions with Google searches for “join a union” increasing by 184%. Unions particularly report new recruits where there is a prospect of industrial action being taken. In a recent 48 hour strike of UNISON members working at the AQA exam board, the branch recruited a large number of members in the run-up. They were joining so that they could take action. This trend towards growth of the movement looks set to continue.

Also of note is the number of national industrial action ballots that have been won handsomely and that smash the Tory anti-trade union ballot thresholds. The Communication Workers Union (CWU) has an impressive recent history of defying these thresholds through its use of national mobilisations, including workplace and gate meetings.

In August and September, more than 110,000 workers at Royal Mail will take four days of strike action over pay, after 97.6% of members voted ‘yes’ on a 77% turnout. This promises to be the biggest strike of the summer strike wave. They have also now been joined by the Felixstowe dockers who have not been on strike since 1989 but have hit the picket lines and brought national and international trade flows to a halt. As Lynch stated at the Durham Miners’ Gala, “the working class is back!”

Importance of coordination and escalation

This is a hugely significant step forward and will need to be acted upon, especially if the Tories follow through on their threats to make such strikes illegal. Socialist Alternative believes that a general strike, starting with an initial 24-hour stoppage, would be a powerful tool for working class people to strike a huge blow against the Tory government.

The TUC leadership does not have a winning strategy, and no confidence should be placed in them to coordinate generalised strike action without unbearable pressure from below, after the experience of them selling-out generalised public sector strike action just over a decade ago in 2011.

It may then fall to the likes of the CWU, RMT, Aslef and Unite leaderships to take their own initiatives. Whilst they have begun to coordinate strike action in places, this needs to go further. These leaders need to come up with a collective fighting strategy to confront the bosses and the Tories. This needs to be based on rank and file-led coordination, which will need to be built from below, across workplaces and between activists at the base of the different unions, combined with calls for decisive action to be organised by the union leaderships.

Although the rail and postal worker strikes have been well supported and caused major headaches for the bosses and the government, an escalation of action beyond a series of 24-hour strikes is necessary. One day strikes can be impressive and inspire huge solidarity from the wider working class, but when disputes are of such high stakes to both the working class and our enemies in the bosses and government, without a clear plan to escalate the disruption they can prove insufficient. A plan of coordinated action between the striking unions, escalating towards the serious threat of an all-out stoppage, would soon bring the government and the employers to their knees.

If we analyse recent successes for workers, all-out action has been a key feature. For example, as we have previously reported, workers at the CHEP pallet supplier in Trafford Park won a huge victory against the employer, but this was on the back of more than 20 weeks of all-out action. It was the longest strike in Unite’s history.

If escalating action were to be coordinated between postal workers, bus drivers, teachers, lecturers, NHS, local government staff and many more, the ruling class and the deeply-divided Tories could be torn apart. If the trade union leaders aren’t prepared to organise this, then rank-and-file trade union members and activists will need to go round them and make plans to coordinate disputes on a national and local level, starting with local solidarity demonstrations and delegations to each other’s picket lines.

It would mean responding in big numbers wherever the threat of using agency workers, or imposing settlements to break strikes, is seriously posed. With actions like these, it would be possible to address many of the questions on workers’ minds around strike pay and victimisation, showing that we can win when we fight!

A clear potential to develop this coordinated fight-back has been seen in the launch of a significant new campaign, Enough is Enough (EIE). Led by Lynch, Ward and others (including left Labour MP Zarah Sultana), so far, it has galvanised widespread support. Already around 450,000 have signed up as volunteers for the demands on the campaign’s website. The first rally in London drew a crowd of 2,000, with many unable to enter the venue due to lack of space. Over 1,000 turned up to the Liverpool rally.

Some rallies and protests have already been organised under this banner, which shows the real potential to use EIE as a means of drawing action together. But this will only reach its true potential if EIE operates on a thoroughly democratic basis, with mass involvement in decision-making by trade union activists and fighters.

This will mean open discussion on how to use this campaign to build up the profile of local and national disputes, as well as coordinating and escalating strike action. Importantly, it could help to fill the gap in political organisation for the working class by acting as a launch-pad for a new left party of struggle, free from the shackles of Starmer’s New Blairite Labour Party.

Given the attacks from the ruling class as the capitalist crisis deepens, only a determined and coordinated response from the trade union movement can mobilise the millions of workers who are suffering at the sharp end. Socialist Alternative will be part of that process in saying: if we fight, we can win!

Statement on Queen's death, King's 'ascension' and the British monarchy

In the wake of Jeremy Corbyn’s re-election to the Labour leadership, the Socialist spoke to Sarah Sachs-Eldridge (National…
byArchive 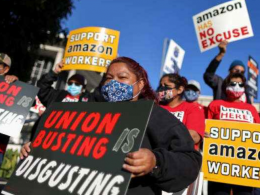