This victory, which saw the Blairite-backed Gerard Coyne relegated to third place behind Steve Turner, is testament to the determination and resilience of Unite members – many of whom have been on the frontlines working in difficult and potentially dangerous conditions throughout the Covid pandemic.

As the new general secretary, Sharon now faces a number of major challenges. First and foremost, there is the need to build a fighting industrial response on the issues of workplace safety, pay restraint, working conditions, and the growing threats of casualisation and automation. These issues are among those most pertinent to both Unite members and the wider working class, much of which is currently in urgent need of organisation.

Most immediately, building the fightback means using the ‘workplace power’ model to direct all necessary resources to win the consultative ballots on pay in the public sector.  In the private sector, it means making clear to employers, such as Rolls Royce, that Unite is in dispute with, that the full power of the union will now be mobilised with solidarity protests and a strategy of widening industrial action, based on connecting the steward and convenor layer of the union to link up disputes and potential disputes. At a strategic level, Unite should be pushing for a programme of coordinated and escalating strike action against this rotten Tory government, as well as further attempts at fire-and-rehire. This requires starting a discussion within Unite about how these things can be implemented on the basis of mobilising members in action. The recent victory of the left in the Unison national executive is also evidence of the huge appetite that exists among workers for struggle, as well as the potential for coordination.

For Sharon to succeed in the aims she outlined in her election campaign, it will be crucial to build upon and broaden out the networks of support that were developed in the run up to this vote. There is an urgent need for a genuinely democratic, grassroots and socialist broad left. The existence of such an organisation, which can bring together the union’s best fighters on the ground, is vital for any leading figure in order for them to withstand the huge pressures that they can face from both from the capitalist class and within the union, as well as to empower the activist base of Unite.

Also essential is that Sharon helps to marry a militant industrial approach with a political strategy that can win for workers. Keir Starmer is currently on an anti-left rampage in Labour, with auto-expulsion letters fired off to leading figures in the trade union movement daily, the latest prominent example being Ian Hodson of the BFAWU. Politically, the party is being returned to the dark days of Blairism. Unite, along with other trade unions, should oppose anti-democratic attacks on the left, whilst facing up to the pressing task of playing an active part in developing a viable political alternative – discussing how a new party of struggle for working people can be built.

Socialist Alternative wishes Sharon all the best in her new role. Our members inside Unite will do all that we can to assist in developing the fighting strategy of the union, both industrially and politically. A further response to this excellent victory and more thoroughgoing analysis of the result will be carried on our website in due course. 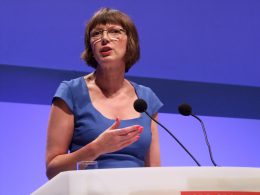