By Philip Stott, 16th September 2013
Around 60 Glasgow City Council staff, Unison members employed as part of the Social Work Homeless Team, have agreed to walk out on unofficial action tomorrow in protest at the suspension of a Unison member on Friday and anger over caseloads. A member of the East Glasgow Homeless Team was suspended on Friday after refusing to undertake work that related to an existing Unison grievance over workloads and staffing levels.
Following the suspension, in a great example of solidarity, fellow union members in the East office walked out on Friday afternoon.
The action in the East office continued today (Monday) and following discussions with management and meetings with workers from the five Homeless teams in Glasgow it was agreed that workers from all the Glasgow Homeless teams would refuse to go into work tomorrow (Tuesday).
Although this is unofficial action, Glasgow City Unison is calling for the immediate lifting of the suspension of their member. The union has gone further and are demanding a resolution to the impossible levels of workload being placed on already stretched union members. Unison have called for increased staffing to handle the growing numbers of people requiring a service and also a cap on the numbers of cases that each member of staff has to deal with.
There is huge anger relating to the intolerable pressure on staff in the Homeless service, across the Social Work department and many other departments in the Labour run Glasgow City Council. This is a direct result of the thousands of jobs losses in the last few years resulting in increasing work pressures on fewer and fewer members of staff.
This action by Unison members is to be applauded and underlines the need to build widespread strike action over workload, pay and working conditions which is becoming a huge issue across local government in Scotland. 37,000 jobs have gone in Scotland from public services since 2010 a result of the Con-Dem austerity and the refusal of the SNP-led Scottish government and local councils to fight the cuts is leading to a crisis.
Socialist Party Scotland members are doing all we can to support these workers in Glasgow and link this battle to the need to build mass coordinated strike action against the cuts that are destroying decent public services. 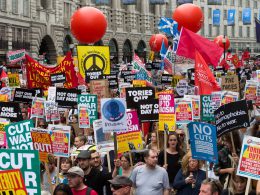