We must take advantage of the divided enemy 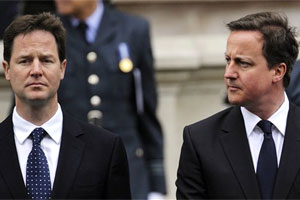 Back when the Con-Dem (Conservative Party and Liberal Democrat) coalition government was young, and Nick Clegg (LibDem Deputy PM) and David Cameron (Conservative PM) were singing each other’s praises in a rose garden, Cameron did show some foresight of the open warfare that is now rocking the coalition.

The Con-Dem coalition put in place grossly undemocratic arrangements for fixed five-year parliamentary terms, which mean that a vote of no confidence in the Commons no longer automatically triggers a general election.

A general election can still be triggered if a motion of no confidence is passed and no alternative government can be found; or if the motion for an early general election is agreed either by at least two thirds of the house or without a division.

These arrangements were clearly designed to keep the vicious austerity coalition in power for five years, irrespective of the mass opposition increasingly demanding that they depart.

It would be wrong, however, for the workers’ movement to conclude that these constitutional ’iron bands’ will necessarily hold the coalition together until 2015.

Senior Lib Dem minister, millionaire Chris Huhne, pleaded guilty to the charge of perverting the course of justice and resigned from parliament. “Never in British political history has a minor traffic offence produced such spectacular consequences” was how the Telegraph’s Peter Oborne summed it up.

He warned of “what looks certain to become this century’s most savage and bitter byelection. It comes at the worst imaginable moment, with the Coalition in partial meltdown, and party activists straining at the leash to get at each other’s throats.”

The trade union and anti-cuts movement needs to take heart from the divided, weak state of its enemy, and launch a massive campaign to defeat it.

This government is implementing the most brutal austerity in 80 years, but it is clear that a mass campaign could defeat it.

The need for a 24-hour general strike, as the next step in that campaign, has never been clearer.

The divisions in the government have not spilled into the open on the issue of austerity or cuts. However, they reflect the extremely shallow social base of both governing parties.

The Royal Society for the Protection of Birds now has more members than all of Britain’s political parties combined!

The Tory Party, which was a mass party with more than three million members at its peak in the 1950s, has been in decline ever since.

Since Cameron became Tory leader in 2005, its membership has halved to 130,000. The Lib Dems have also lost at least 5,000 members since they entered the coalition government, while their electoral base has been severely eroded.

These parties act in the interests of a system which, even before the start of the ’great recession’, meant stagnating wages and increasing hours for the majority.

Over the last five years British capitalism has delivered an average 15% fall in real wages, with no prospect of a return to healthy growth.

The capitalist parties are rightly associated in the minds of the majority with economic crisis, cuts, sleaze and corruption. The MPs’ expenses scandal still hangs like a stink over Westminster.

The current splits in the coalition are coming to the surface as the different forces within it scramble to try and secure their future careers. There is more than a hint of rats and sinking ships!

The Lib Dems came into open opposition to the Tories by voting against the boundary changes because, if implemented, it would have increased the number of their MPs that will be culled at the next election.

It sums them up that they are not showing equal determination when it comes to stopping further cuts against the poorest, however.

It now appears that, despite claiming they would not do so, the Lib Dems will be prepared to accept the coalition proposing new benefits cuts, on top of the misery that has already been planned.

Clearly, only building mass opposition to cuts will force home reality to the Lib Dems – that their careers are on the line not primarily because of boundary changes – but because they are part of a government that has made millions of people’s lives a misery.

And the more cuts the Lib Dems sign up to, the harder the electorate will take its revenge at the ballot box.

The Tory Party itself is also riven with open splits. Cameron had hoped that, by promising an in/out referendum on Europe after the next election, he would be able to temporarily quiet the ’little Englander Tories’.

However, as recent events have shown, the most reactionary section of the Tory Party have been given confidence by Cameron’s concessions to them and are continuing to threaten the current Tory leadership’s rule, and could, at a certain stage, lead to a split in the Tory party.

Cameron had hoped that, by agreeing gay marriage rights, he could recreate the illusion he first conjured back in 2005, that the Tories were no longer the ’nasty party’.

Instead he has once again split his party down the middle and revealed to the world how little the Tory party has changed on social issues.

When the general election is called, which could be this year, many workers will vote Labour, hoping a Labour government would be ’less bad’ than the current lot.

However, New Labour is not exempt from the distrust the majority feel for capitalist politicians.

According to polls, all three major political parties have negative trust ratings, with 46% not trusting Labour leader Ed Miliband.

Labour’s policy of ’cuts, but more slowly’ does not create enthusiasm, as the low turnout in recent byelections has shown.

New Labour’s membership increased in the wake of the 2010 general election from an all-time low of 150,000 to around 190,000, but is still at historically low levels.

The Tories make every effort to divide us – workers from unemployed, young from old, etc. But the best way to defeat this divided government is to be united.

The workers’ movement needs a new mass party, which opposes cuts and puts forward a socialist programme, standing in the interests of the working class and not the capitalists.

The Trade Unionist and Socialist Coalition is important preparation for such a mass party.

Dave Nellist, Socialist Party member and registered leader of TUSC, was an MP for nine years and only took a worker’s wage, a model for the kind of MPs the workers’ movement needs in the future. 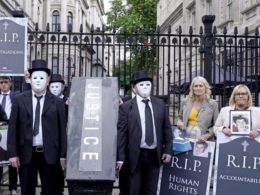 By The latest budget announced by George Osborne consists of yet more public sector cuts, privatisation, and vicious attacks on the most vulnerable in society. It is another budget for the rich that will see the top rate of income tax cut from from 50p to 45p - a windfall to those on salaries above £150,000 - and a further cut in corporation tax on top of those previously announced. By 2015, it is estimated the planned reductions in corporation tax will see £5 billion per year lost to the public purse.