The invasion of Iraq on 20th March 2003, alongside the collapse of Lehmann Brothers in 2008, will be remembered as one of the defining moments of this historic period. The occupation failed to do anything but decimate the country, destabilise the region and create a quagmire that sucked coalition forces into a protracted war.

The occupation of Iraq resulted in over a million Iraqis and nearly 5,000 coalition troops being killed, with millions injured. Coalition forces were involved in widespread and systematic torture, as well as mass killings of innocent civilians. They also pursued a divide-and-rule strategy between Shia, Sunni and Kurds which has resulted in an ongoing sectarian conflict that still rages – a bombing in Baghdad on 3rd July killed 281 in a single attack. This sectarian conflict has directly led to the development of ISIS and given fuel to the fire of Islamic fundamentalism whose attacks around the world have increased substantially since the invasion. It makes Bush and Blair’s stated intention of “a war on terror” look ridiculous.

War at any costs

Chilcot’s inquiry into the build up to and handling of the conflict has only confirmed what the anti-war movement at the time argued – that the establishment was determined to rush into war. In reality, this had nothing to do with delivering democracy and everything to do with oil, profit and prestige. Chilcot highlighted that the spurious claim of weapons of mass destruction (WMDs) being deployed by the Saddam Hussein regime at 45 minutes’ notice was based on an intelligence briefing that was given “a certainty that was not justified”. Blair, backed up by Lord Falcon and Jack Straw, exaggerated these claims to convince Parliament to vote for war based on WMDs that never existed. He also points out the flip-flop of Lord Goldsmith in his advice in the legality of going to war. The inquiry gives concrete examples of how Blair and Co manipulated and created evidence to suit their objective – a quick, US-led invasion of Iraq, preferably with the backing of the UN but, if necessary, without.

The report also identifies the failure of the occupying powers to deal with a post-Saddam Iraq. However, they had prepared to ban strikes, privatise Iraq’s oil and auction off the rebuilding of the country they’d just bombed to the highest bidder. Haliburton – a company connected to Dick Cheney, US Vice-President at the time – is estimated to have made $39.5 billion from the conflict. While the war and occupation is expected to have cost $1.7 trillion, this was paid for by ordinary working people with money that wasn’t spent on schools and hospitals. The cost to ordinary Iraqis is truly unimaginable, as the horror continues in Iraq and throughout the Middle East today.

Although history will judge them as war criminals, Blair and Bush are unlikely to face justice for their crimes unless we challenge the system which allowed them to go to war in the pursuit of profit in the first place. They are representatives of capitalism, which requires war at the behest of big business and at the cost of misery for ordinary people.

In the build up to the war, the Socialist Party warned of the horrors that would unfold. However, we also pointed to the power of ordinary workers to unite against war, poverty and sectarianism, to take control of the huge resources of the region and use them in their own interests. We saw a glimpse of this in the large protests and strikes in 2011 across the Middle East that saw the toppling of dictators in Egypt and Tunisia. The brutal legacy of Iraq means the struggle against war, oppression and poverty, the struggle for a socialist federation of the Middle East is more urgent now than ever. 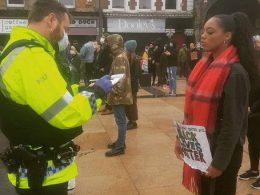