The Northern Ireland Executive has announced that they are now in the recovery phase of the Covid-19 pandemic. This has meant an easing of restrictions and a significant push to reopen the economy. Most non-food retail reopened on Friday 12th June and shopping centres will reopen on the 22nd June. It has to be asked, who has made the sacrifices during the pandemic, and who will pay the price for the push to reopen the sector?

As Amazon’s Jeff Bezos is predicted to become the world’s first trillionaire and retail stores such as Sainsbury’s, Tesco and Asda have all seen a massive boom in their profits, workers are footing the bill for the Covid-19 crisis, not only financially, but also in terms of their health and safety. The re-opening of non-essential retail without adequate PPE and distancing measures – as has been the case in many essential retailers – adds to the risk that a second wave of the virus will take hold in the North.

In the US, Trump’s callous disregard for workers’ lives and an early reopening in many states has now resulted in a second wave of the virus pushing the number of confirmed cases to over 2 million. If this shows us anything, it is that the bosses and capitalist politicians can’t be trusted to manage reopening in a safe and responsible way. Workers should decide when and how retail reopens.

Retail workers have been providing essential services throughout the crisis, but have been treated in the most obnoxious way. Inadequate PPE, no proper health and safety measures, and all the horrible conditions faced from before the pandemic – low pay, unreliable hours and bullying, to name but a few. Even before the pandemic, we saw the true nature of the retail giants, with Asda less than a year ago sacking workers for not signing on to their new ‘Contract 6’ which got rid of overtime and paid breaks, and slashed night rate pay and holiday entitlements.

The disgraceful treatment of workers by retail bosses during the crisis is a continuation of their methods, reflective of their incessant drive for profit. Low wages, zero-hours contracts, inadequate and unpaid breaks, and atrocious conditions all benefit bosses and ensure they make as much money off the backs of workers as possible.

We should have no trust in Stormont or Westminster to protect working-class people with their plan to reopen the economy. The two sectarian blocs are clearly united on one thing – their commitment to put profit before workers lives at risk. Throughout lockdown, they have failed to enforce health and safety in ‘essential’ workplaces, and they have bowed before the demands of big business. The main Stormont parties have campaigned for the power to cut corporation tax, while slashing jobs and benefits. If their history is anything to go by, we shouldn’t trust them in providing a safe plan to reopen the economy.

Organise and fight back!

It should be workers that decide when and how they go back to work. With over 250,000 trade union members in the North alone, and with 450,000 in retail union USDAW across the UK, it is possible that a fighting, member-led trade union movement can dictate on what terms the sector and the economy is reopened.

Any such movement should demand: a £12/hour minimum wage, plus hazard pay; proper PPE for all workers; better conditions for retail staff, such as proper and paid breaks and fair holiday entitlement; and the election of workers’ representatives with control over health and safety in all workplaces. A movement taking this shape has the power to force the bosses’ and government’s hands into providing better pay and conditions.

The past continues to haunt the present in Northern Ireland. In the last week of February a major…
byArchive 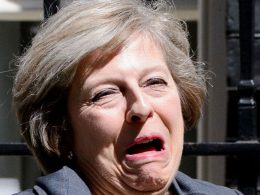 Far from being a strong government, May fears that, given the Tories' wafer-thin majority in parliament, she could be overwhelmed by forced u-turns. In the first year of the government alone there were eleven, now - in order to try to prevent more - May has made the biggest u-turn yet. Having pledged not to call a snap election she has gone ahead and done so. This shows how capitalist politicians change the rules whenever it suits them.
byArchive
Read More